UCLA's Thompson-Robinson has plenty he wants to accomplish 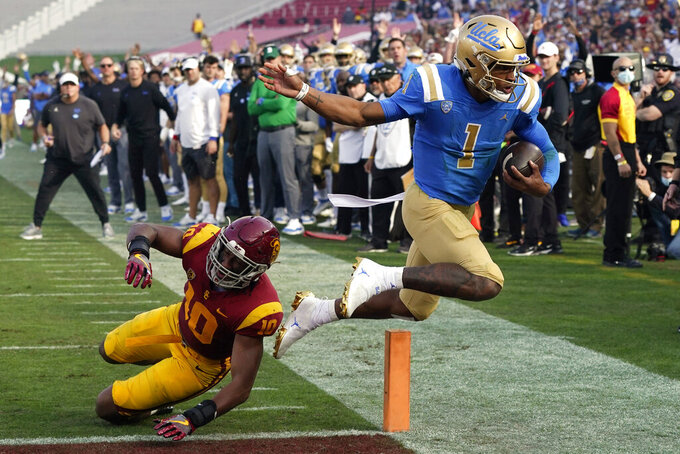 FILE - UCLA quarterback Dorian Thompson-Robinson, right, runs the ball in for a touchdown as Southern California linebacker Ralen Goforth defends during the first half of an NCAA college football game, Saturday, Nov. 20, 2021, in Los Angeles. Thompson-Robinson is back for a fifth season as UCLA's quarterback when many, including coach Chip Kelly, thought he would leave for the NFL. (AP Photo/Mark J. Terrill, File)

LOS ANGELES (AP) — Dorian Thompson-Robinson is back for one more season at UCLA, even though many encouraged him to declare for the NFL draft.

The fifth-year quarterback would have been a midround pick in this year's class. But Thompson-Robinson cited getting his degree, along with trying to wrap up some unfinished business this upcoming season, as reasons for sticking around.

Thompson-Robinson also wanted to play another year for coach Chip Kelly, even though Kelly was one of the people suggesting he go to the pros.

“That was pretty awkward at times, trying to talk to him about it. I love coach Kelly and the plan that him and Gundy have for me. I think the decision’s worked out well for me so far,” Thompson-Robinson said.

Kelly said he wanted Thompson-Robinson back “in the worst way," but that he also thought the QB's draft chances were good in what is considered a weak quarterback class.

“The experience factor is something you can’t teach,” Kelly said. “To have a quarterback, really a leader, coming back in year five is a really good boost for us.”

The spring practices were mainly about him getting up to speed with what is largely a new group of receivers. Kyle Philips and tight end Greg Dulcich declared for the NFL draft while Chase Cota transferred to Oregon. That trio had 119 of the Bruins' 207 receptions last season. They also had 16 of UCLA's 23 receiving touchdowns.

Kazmeir Allen went into the spring as the Bruins' leading returning receiver (17 catches, four touchdowns) but they are not bereft of talent. They added Jake Bobo from Duke and Titus Mokiao-Atimalala from UCF during the offseason. Bobo led Duke in receiving last year with 74 catches.

Matt Sykes and tight end Hudson Habermehl have also stood out during the April practices.

“Guys like Bobo and Titus, they’ve really come along really well,” Thompson-Robinson said. “The receiver room is looking really good. Obviously, they have a lot to learn with some new faces in there. On the field it has been all about communicating a bunch of pre-snap so we are able to play fast post-snap and be on the same page."

Thompson-Robinson accounted for 30 touchdowns last season — 21 passing, nine rushing — as well as 3,018 yards of total offense. He will need to improve on those numbers if the Bruins are to get back-to-back winning seasons for the first time since 2015.

UCLA posted its first winning season in Kelly's fourth year, going 8-4. The Bruins did not participate in the Holiday Bowl due to COVID-19 outbreaks within the program.

The Bruins could be among the favorites in the Pac-12 South, along with defending conference champion Utah and a retooled USC.

“I think we left a whole lot on the table last year. Definitely those four games we lost, plus the bowl game, is definitely hurting and definitely left a bad taste in our mouth. So we’ve got some things we wanna prove still,” Thompson-Robinson said.

Thompson-Robinson also added a new tattoo on his right arm during the spring, honoring the late Dwayne Haskins, who died on April 9 after being struck while walking on a south Florida highway.

Haskins was a mentor of Thompson-Robinson's and worked with him during trips to Los Angeles.

“He really gave me the keys of the game to college football and how to be a quarterback. I couldn’t be more grateful for Dwayne and I listened every day,” he said.