2020 Winter Classic to be held at Cotton Bowl 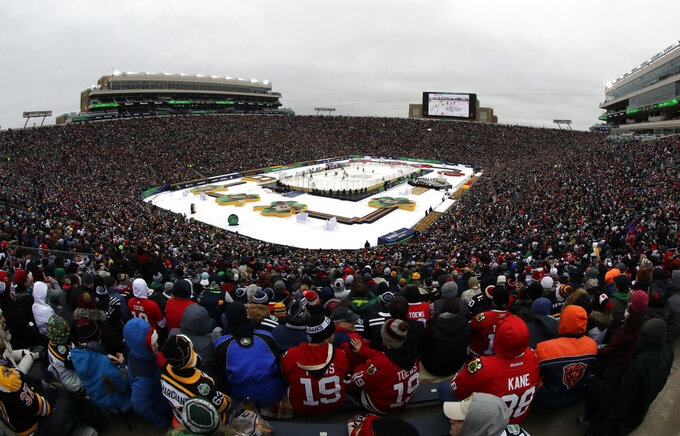 A general view of Notre Dame Stadium is seen in the second period of the NHL Winter Classic hockey game between the Boston Bruins and the Chicago Blackhawks, Tuesday, Jan. 1, 2019, in South Bend, Ind. (AP Photo/Nam Y. Huh)

The Dallas Stars will host the 12th edition of the NHL's annual outdoor game on New Year's Day. But Commissioner Gary Bettman says the league hasn't decided on their opponent.

Bettman also announced the Heritage Classic will return on Oct. 26 when the Winnipeg Jets play the Calgary Flames at Mosaic Stadium in Regina, Saskatchewan. The NHL also will play outdoors at Air Force Academy on Feb. 15, 2020, as part of the Stadium Series, but it hasn't finalized the opponent for the Colorado Avalanche.

Bettman made his remarks during the second intermission of Tuesday's Winter Classic between the Boston Bruins and Chicago Blackhawks.

By Ralph D. Russo an hour ago
3 hrs ago
John Fineran 3 hrs ago
By Cliff Brunt 4 hrs ago
By Pat Graham 4 hrs ago