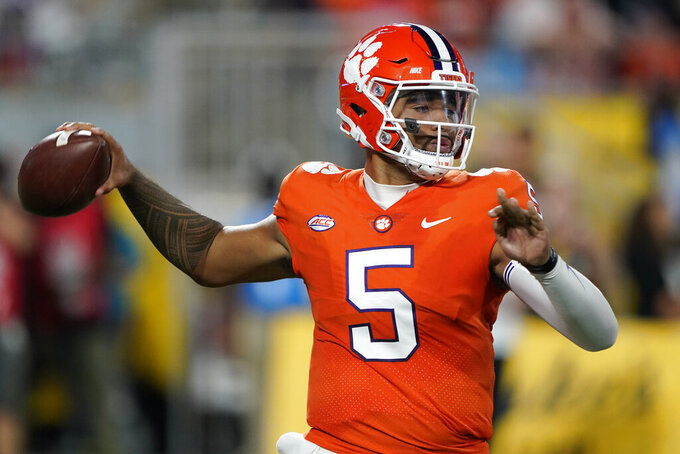 The Atlantic Coast Conference crown seems up for grabs after the league’s disappointing opening week performance.

Its three preseason ranked teams all lost as the league went 7-7, a dent to a conference eager to show that it's more than just Clemson at the top.

The Tigers, who started at No. 3, fell to No. 2 Georgia 10-3. North Carolina, ranked 10th last week, and de facto No. 1 overall NFL draft pick quarterback Sam Howell, struggled to generate points in a 17-10 loss at Virginia Tech.

And Miami, which was ranked 14th, was battered 44-13 by defending national champion — and favorite to repeat — No. 1 Alabama.

“As a coach, it doesn't lighten the burden of how you played, but you say, ‘OK, this is college football, this is Week 1,'" Clemson offensive coordinator Tony Elliott said.

That's the mindset for much of the league in its .500 start. Only the Pac-12 among the Power Five conferences had as rough a go at 6-6.

The Southeastern Conference went 12-2, including three victories over ACC teams: Mississippi topped Louisville 43-24 to go along with Alabama and Georgia victories.

The Tar Heels came in as the favorites to win the ACC Coastal Division. Now they must play catchup after falling at Virginia Tech — the lone conference game in Week 1.

There were also a couple of unexpected results: Duke fell at Charlotte 31-28 while Georgia Tech lost at home to Northern Illinois 22-21.

In all, a forgettable weekend, especially for the ACC teams with the highest expectations.

The Tar Heels had their first preseason top-10 ranking since 1997, in coach Mack Brown's first run there. He believes it's smarter evaluating teams later in the season when there's a solid body of work.

Clemson's offense short-circuited in the Georgia loss in the Tigers' first game without NFL first-round draft picks Trevor Lawrence at quarterback and Travis Etienne in the backfield.

Lawrence's replacement, D.J. Uiagalelei, was sacked seven times, overthrew receivers at critical times and the Tigers were held without a touchdown for the first time since the 2017 CFP semifinal against the Crimson Tide.

“The only thing we can't be is undefeated,” Swinney said.

Duke coach David Cutcliffe said college camp is not like the NFL. There's a limited amount of time for contact and when you do scrimmage, you worry about injuries that could cost you down the road.

“So I don't think we would overreact to any of that,” Cutcliffe said. “The dust will come out.”

ESPN analyst Kirk Herbstreit, who called the Georgia-Clemson game, said it's not too early to see warning signs of things that need fixing.

For all the teams that lost openers, Herbstreit said “it's about getting your confidence back.”

At some ACC schools, it's got to happen quickly.

Third-year Georgia Tech coach Geoff Collins was asked about dissatisfied fans, then stared at the questioner for 11 seconds before answering.

“I’m excited for Saturday" and the game against Kennesaw State, Collins said, “lessons learned from the game so we can apply and just take the next step every single week in the program to get better.”

The ACC programs that won in Week 1 also hope to refocus before the next game.

North Carolina State shut out South Florida 45-0 to start its season. Wolfpack coach Dave Doeren understands there's plenty of work ahead for his team that hopes to challenge Clemson for the ACC Atlantic Division title.

He spoke to his players about not putting too much on one result, win or lose.

“We can't get too high with our win,” he said. “And those teams that lost, they're going to get better.”

In Doeren's view, the ACC was close to a truly special start. Florida State had the chance to stun No. 8 Notre Dame, a CFP participant last season, but missed a tying field goal in overtime to fall 41-38.

“It wasn't like we went out and laid an egg when there’s a bunch of competitive games,” Doeren said. “And we were one possession away as a league of making a bunch of good things happen."