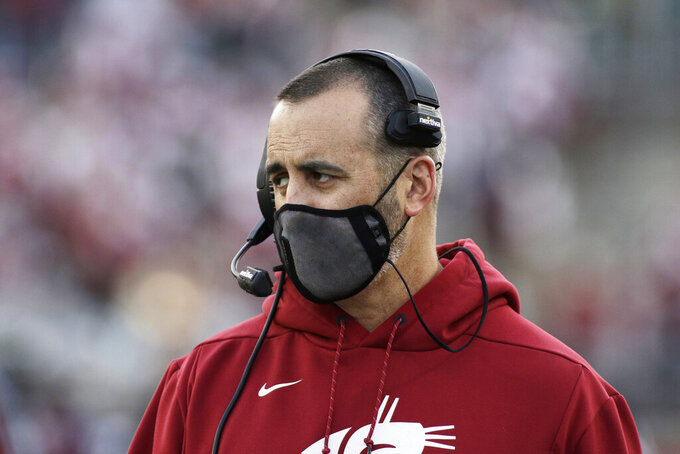 FILE - Washington State coach Nick Rolovich watches during the first half of an NCAA college football game against Stanford on Oct. 16, 2021, in Pullman, Wash. The former Washington State football coach has filed a claim against the university on April 27, 2022, seeking $25 million for wrongful termination after he was fired last year for refusing to get vaccinated against COVID-19. (AP Photo/Young Kwak, File)

Dickert was named interim at midseason when Nick Rolovich was fired for refusing to take the COVID-19 vaccine. Dickert then went 3-3, his Cougars beat Washington in the Apple Cup and they made it to the Sun Bowl. Dickert was rewarded by having the interim label removed.

He didn’t hesitate in making changes, either. The most noticeable will be on offense: bringing in a new offensive coordinator in Eric Morris, and a new starting quarterback in Cameron Ward.

Dickert said he felt the Cougars needed a change on offense — they averaged 27.8 points per game last season — and they'll be using a tight end this season for the first time in a decade.

“I think in college football, you need to play with a pace," he said.

As for Ward, who was recently named to the watch list for the Maxwell Award that's given to the most outstanding player in college football, Dickert is “a believer.”

“Cam has come in and earned the trust of this football team through repetitive action and hard work," he said, adding, “Cam hasn’t reached his ceiling."

Passing is always key to the Washington State attack and will be even more crucial with running back Max Borghi off to the NFL. Nakia Watson and freshman Jaylen Jenkins will handle the rushing duties.

Dickert said he wants the Cougars to have “a team mentality,” so that “each and every one of our guys know they’re playing for the man next to them.”

"I can’t speak to the other regimes on that, but I know that’s what our guys will hang their hat on each and every week.”

The Cougars stayed in games last season because the defense wouldn't break, allowing just 24 points per game. The Cougars were tops in the Pac-12 in red-zone defense and led the Pac-12 with 29 takeaways.

The defensive front four has a first team all-Pac-12 returner in Ron Stone Jr., who had 11.5 tackles-for-loss and five sacks. The senior from San Jose, California, has been named to the Bronko Nagurski Trophy watch list and was a preseason all-Pac-12 first team pick.

All-Pac-12 nickel back Armani Marsh returns, and is joined by Jordan Lee, who made 142 tackles for Nevada over the last three seasons. Transfer Cam Lampkin made 72 tackles with ten broken up passes as a cornerback for Utah State.

But not for Dickert.

“I’m really excited about the future of the Pac-12 and Pac-12 football." Dickert said. “I talk to our guys all the time, change is inevitable in life. College football is changing at a very, very fast rate ... I think the Pac-12 is going to be here and is going to be thriving for a very long time.”

Dickert led the Cougars to a dominating 40-13 Apple Cup victory over rival Washington, snapping a seven-game skid to the Huskies and giving Washington State its largest margin of victory in series history.

“I know our people’s food tastes better when we win that game," Dickert said. "That’s how much the Apple Cup means to us."

Washington State opens by hosting Idaho on Sept. 3, then playing at No. 18 Wisconsin and hosting Colorado State.

In Pac-12 play, they host No. 11 Oregon, California, No. 7 Utah, Arizona State and close the home schedule against Washington in the Apple Cup.

The Cougars' main road challenges are at No. 14 USC, Oregon State and Stanford.