Aranda wants No. 10 Baylor to have crisper start to '22 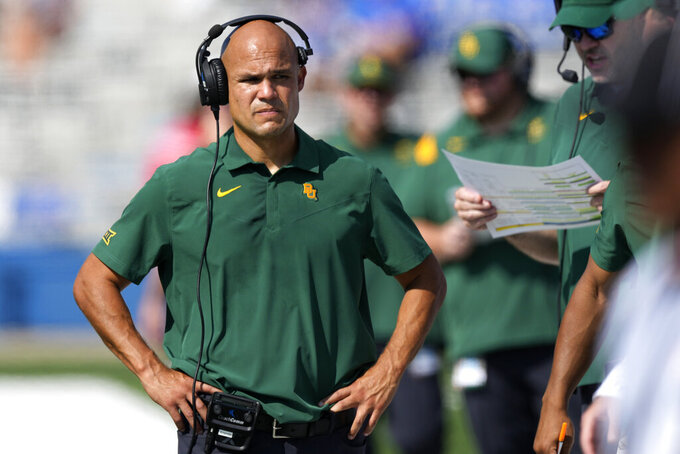 FILE - Baylor head coach Dave Aranda walks the sidelines during the first half of an NCAA college football game against Kansas in Lawrence, Kan., Saturday, Sept. 18 2021. With No. 10 Baylor coming off a school-record 12 wins and going into this season opener as an overwhelming favorite, coach Dave Aranda wants these Bears to develop their own identity. (AP Photo/Orlin Wagner, File)

WACO, Texas (AP) — With No. 10 Baylor coming off a school-record 12 wins and going into this season opener as an overwhelming favorite, coach Dave Aranda wants these Bears to develop their own identity. He certainly wants a crisper start.

Long before the Bears were Big 12 champions and won the Sugar Bowl, they began last season having to grind out a victory on the road against a Sun Belt team that went on to have a losing record.

“A lot to be desired from a year ago, first game,” third-year coach Aranda said, referring to that 29-20 win at Texas State.

Baylor plays Saturday night against Albany, an FCS team from New York that was 2-9 last season. This wasn't the expected 2022 opener for the Bears, who had planned to host Louisiana Tech before that game was canceled in January.

No matter who they are playing, Aranda and his staff this week talked about identity, competitive maturity and energy.

“There’s a jazz musician who said, ‘Jazz is simple, but simple ain’t easy.’ It would be great to really be good at the ‘simple ain’t easy’ part,” Aranda said. “I think there’s a fair amount of teams that maybe struggle with that part. For us to really make an impact in that area would be ideal.”

Aranda also talked about the competitive maturity to handle any situation, and having strong energy to start games.

Aside from a very experienced line, there are a lot of changes on offense. Blake Shapen took over as the top quarterback in the spring after beating out incumbent starter and since-departed Gerry Bohanon. Top receiver Tyquan Thornton and do-everything Trestan Ebner were NFL draft picks and 1,621-yard rusher Abram Smith played his final college season.

Shapen started twice last season when Bohanon was injured, and was the MVP of the Big 12 championship game when he had 17 consecutive completions and threw three touchdowns.

“Every single day, he’s gotten better at being a vocal leader, coming out here leading this offense,” center Jacob Gall said. “He got valuable reps against very good opponents. You can never take those reps for granted. ... I think those reps are really going to help bring him some confidence.”

Poffenbarger, who transferred from Old Dominion to Albany following spring drills after not playing last season, will start after a four-man quarterback competition in fall camp. But Great Danes coach Greg Gattuso also plans to use sophomore Joey Carino and freshman Tyler Szalkowski in the opener, and said the job isn’t necessarily settled.

“He’s played the best of the three good ones and, for whatever reason, he’s kind of shined with some of his throws,” Gattuso said of Poffenbarger. “But they’ve all been good. It’s been a good battle. It’s not over.”

Carino is the most experienced Albany quarterback. He was 41-of-68 passing (60%) for 530 yards and three touchdowns last season when he played in 11 games, but started only one. Szalkowski appeared in only one game.

Led by preseason AP All-America left tackle Connor Galvin, the Bears have an experienced offensive line. Galvin is a fifth-year senior and there are also two graduate transfers going into their second season starting for the Bears — center Gall (Buffalo) and right guard Grant Miller (Vanderbilt). Sixth-year senior right tackle Khalil Keith isn't expected to play the opener because of a lingering injury from fall camp.

“We knew what the core was going to be, so I think we’ve been with each other a lot during the offseason and especially during camp,” Gall said.

Also back are all the starters on Baylor's three-man defensive front. That group is led by second-team AP preseason All-America nose tackle Siaki Ika, along with sixth-year senior Cole Maxwell and junior Gabe Hall.

Baylor enters 2022 on a five-game winning streak, which was capped by their win over Ole Miss in the Sugar Bowl. That trails only a six-game winning streak by fourth-ranked Clemson. ... The Bears were 7-0 last season at McLane Stadium, their campus stadium on the banks of the Brazos River.