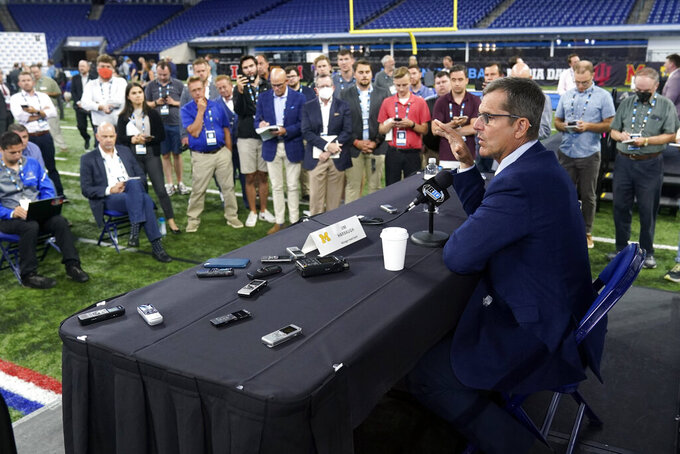 He needs some new faces to emerge to make it two in a row — and he thinks he has the bodies.

Just four months after losing Heisman Trophy runner-up Aidan Hutchinson, defensive back Daxton Hill and linebacker David Ojabo in the NFL draft, Harbaugh returned to Indianapolis to explain what the Wolverines have in reserve.

“We had a great defense last year," Harbaugh said Tuesday at football media days. “People are asking how we're going to replace those stars? The thing is I've been part of many teams where the no-star defense was the better defense and I've got a sneaky suspicion it could be even better this year, honestly.”

At least that's the hope.

But much has changed around the Big Ten and especially in Ann Arbor since the Wolverines made their first College Football Playoff appearance.

In addition to losing Hutchinson, Hill and Ojabo, defensive coordinator Mike Macdonald rejoined the Baltimore Ravens. Then, for the second straight year, Harbaugh took the advice of his most trusted adviser, his brother and Ravens coach John Harbaugh, and hired Jesse Minter, another former Baltimore assistant.

The revamping and readapting, especially on defense, has become a league-wide routine.

“I didn't like how it felt,” Allen said. “That's where I cut my teeth as a coach and how I got this job. So we created a system where I'll be calling the plays and Chad Wilt will be the defensive coordinator. To me, it was more of a gut-feeling that I needed to do this.”

The bigger changes may be more evident in the Big Ten West, where the league's more traditional black-and-blue image remains most prevalent.

Iowa, Wisconsin and Northwestern have combined for eight consecutive division titles and have captured 10 of 11 since the league's format was introduced in 2011.

Each team has had its greatest success when balanced, ball-control offenses are paired with stout defenses. The model worked perfectly for Iowa last season and Northwestern in 2018 and 2020 though the Buckeyes won all three title games.

The problem: When things go awry, it can get ugly fast.

“The quickest way to lose games is to throw the ball over your head at Level 3 and we had that happen too much last year,” Northwestern coach Pat Fitzgerald said, explaining his team's 3-9 mark with a lone Big Ten win in 2021. “It's really everybody but we've been pretty solid in that group (secondary) over the years and I think we'll be very competitive there this year."

There is no guarantee Wisconsin, which lost eight of its top 10 tacklers from 2021, or Iowa, which lost three key players in the secondary, will be as strong in 2022.

Michigan State was an impressive 11-2 (7-2 Big Ten) in coach Mel Tucker's second season despite finishing 11th in the league in defensive pass efficiency.

But it's Ohio State and Michigan that will face the most scrutiny this season after being picked to finish first and second in the East. The soaring expectations for Michigan after finally beating the Buckeyes for the first time in a decade only make the stakes that much more important for Harbaugh and his new defensive guru.

“I’d have to go back to before the 2021 season and my brother said you can have Mike Macdonald or Jesse Minter, they’re both great,” Harbaugh said. “So I went back and talked to Jesse Minter and just felt it was the absolute best thing for the team."