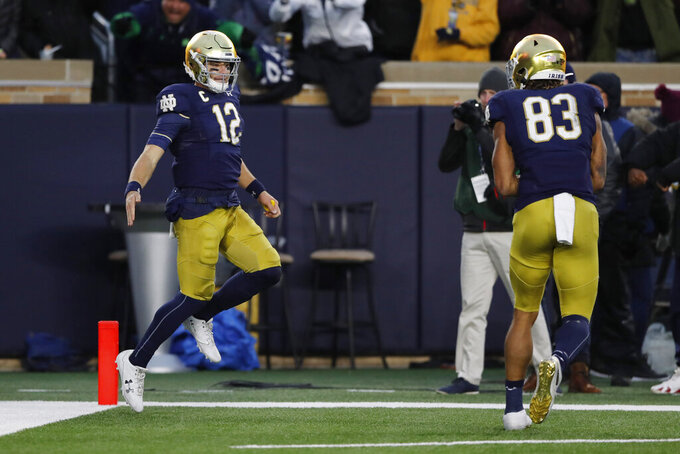 Book ran 7 yards for a touchdown with 29 seconds left to cap an 18-play, 87-yard drive as the 16th-ranked Fighting Irish pulled out a 21-20 victory over the Virginia Tech and averted a second straight loss.

After getting blown out at Michigan last week, Notre Dame faced some harsh criticism.

"This week was about our team," Book said after his designed run on third-and-goal tied the game at 20-20. "It was about having that strong love for each other and just going out there for one another and playing for each other."

Jonathan Doerer kicked the go-ahead PAT after holder Jay Bramblett fielded a low snap and freshman Kyle Hamilton then picked off a long pass by Quincy Patterson to seal the victory, the 16th straight by the Irish in Notre Dame Stadium.

"That was a great character victory for our football team," Irish coach Brian Kelly said. "They endured a lot this week. They found a way to win."

Book led a methodical drive, converting two fourth downs, including a fourth-and-10 at the Tech 33 for 26 yards to Chase Claypool that gave the Irish first-and-goal from the 7. After two incomplete passes, Notre Dame caught Virginia Tech in a blitz and Book ran away from it and darted into the end zone.

Book passed for 341 yards, with two touchdowns and two interceptions, and led the Irish with 50 yards on 13 carries.

The Irish committed three turnovers deep in Virginia Tech territory, including a fumble at the goal line by Jafar Armstrong that Hokies safety Divine Deablo returned for a 98-yard touchdown to tie the game at 14 with 9 seconds left in the first half.

The Hokies (5-3) added a pair of field goals by Brian Johnson in the second half and the Irish missed one, leaving Notre Dame trailing by six with 3:19 remaining and the ball at its 13. But Book and the Irish came through.

"It's a tough locker room in there," Virginia Tech coach Justin Fuente said. "It's a group of guys that played hard, prepared well for a very good football team on the road in a hostile environment and almost pulled it off."

Patterson got the start for Virginia Tech at quarterback in place of Hendon Hooker, who had started the three previous victories but suffered a knee injury in Virginia Tech's 43-41 six-overtime victory over North Carolina two Saturdays ago.

Fuente went with Patterson over Hendon Hooker, who had started Tech's previous three victories but suffered a knee injury two weeks ago in the six-overtime victory over North Carolina.

"The bottom line was I couldn't pull the trigger on putting (Hooker) in, I just couldn't," Fuente said.

Patterson ran for 77 yards on 19 carries and completed 9 of 28 passes for 139 yards and an 8-yard touchdown to Damon Hazelton in the second quarter.

Virginia Tech: The Hokies had six three-and-outs offensively in the first 30 minutes as Patterson struggled to find a rhythm. But Bud Foster's defense hurried Book enough to keep things close with five three-and-outs of their own in the first half. That the Hokies took the lead and battled the Irish to the finish was pleasing to Fuente.

"I feel awesome about our chemistry," he said of going forward. "We've got four games in a row and we'll have to patch it together health-wise to have a chance."

Notre Dame: The Irish did everything they could to give the 17-point underdogs a chance to win, including a punt-catch interference penalty on Bo Bauer that gave the Hokies a short field at the Irish 45 and led to the first Tech touchdown. Deablo's fumble return at the end of the first half then took the momentum away from the Irish.

"That was difficult, but our guys responded," Kelly said. "We told them they had to continue to fight, continue to persevere. They did that. Those are all character traits we were looking for that we needed to see on display. We saw them."

Notre Dame fell from No. 8 to No. 16 after losing to Michigan. This sloppy performance probably won't do much to help the Irish regain that ground.

Deablo entered Saturday's game with one career interception and one fumble recovery and ended up doubling both against the Irish. He stopped a Notre Dame scoring drive when he intercepted Book at the Tech 2 in the third quarter, and had five solo tackles.

"It didn't feel real at the time," Deablo said of his touchdown. "I saw the quarterback and I knew he wasn't going to tackle me. I saw the wall of blockers, so I knew we had a touchdown after that."