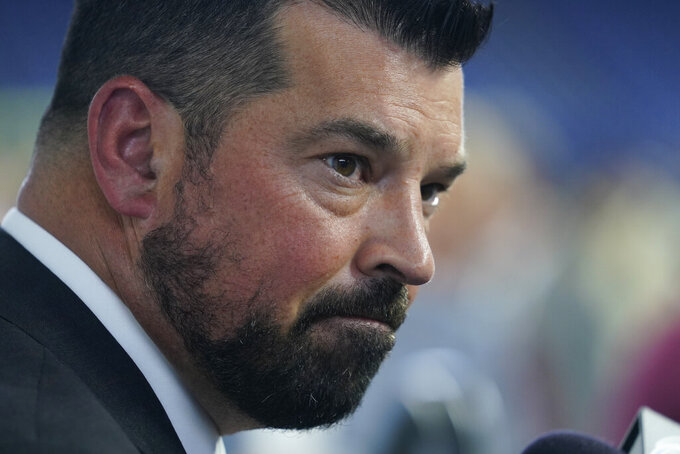 FILE — Ohio State head coach Ryan Day talks to reporters during an NCAA college football news conference at the Big Ten Conference media days, in this file photo from July 27, 2022, in Indianapolis. Nine months later, the sting of losing to Michigan is still fresh for Ohio State. Coach Ryan Day said it's been the source of motivation for everyone at the Woody Hayes Athletic Center. (AP Photo/Darron Cummings, File)

The Big Ten shook up college athletics this summer by announcing the additions of Southern California and UCLA in 2024 and negotiating a blockbuster multimedia rights deal.

When it comes to what's expected to happen on the football field, the narrative is the same as usual.

Michigan and Iowa rose up to reach the 2021 Big Ten championship game, ending the Buckeyes' run of four straight conference titles. But coach Ryan Day appears to have fixed what ailed his team last year by hiring a new defensive coordinator, and he has playmakers everywhere on offense.

Now add the motivation derived from losing to Michigan for the first time since 2011.

“I’m excited about what this team is,” Day said, “and I would kind of describe them as edgy this offseason.”

With quarterback C.J. Stroud, running back TreVeyon Henderson and receiver Jaxon Smith-Njigba the top skill players, the Buckeyes should make a run at matching their nation-best 45.7 points per game.

The defense ranked in the bottom half of the Big Ten and returns most of its personnel. The difference: Jim Knowles was hired away from Oklahoma State after he put together the best defense in the history of the Cowboys' program.

No. 8 Michigan, which won its first Big Ten title since 2004, must rebuild a defense that lost seven starters and has a new coordinator in Jesse Minter. The Wolverines have experienced quarterbacks in Cade McNamara and J.J. McCarthy, a breakaway threat in Blake Corum and what coach Jim Harbaugh said could be his best group of receivers in his eight seasons.

Penn State has a known quantity in sixth-year quarterback Sean Clifford, but questions abound on the offensive line and on a defense now coordinated by Manny Diaz.

No. 15 Michigan State will be hard-pressed to duplicate its 11-win season with road games against Michigan and Penn State and a home cross-over game against Wisconsin.

No. 18 Wisconsin hasn't been to the Big Ten title game since 2019 but is the preseason favorite in the West for the third straight year and seventh time in the nine years of the East-West format.

The Badgers have a third-year starting quarterback in Graham Mertz, who's yet to match his recruiting hype, and a rising star in running back Braelon Allen. But the defense lost eight of its top 10 tacklers, and the Badgers must play Ohio State on the road.

Defending West champion Iowa capitalized on a ball-hawking defense to win 10 games for the second time in three years, and some of the biggest stars from that unit are back. However, there's no evidence the Hawkeyes have done anything to improve their plodding offense.

Purdue and Minnesota are in position to make runs. The Boilermakers posted their first nine-win season since 2003 and return quarterback Aidan O’Connell. The Gophers have a veteran offense led by quarterback Tanner Morgan.

Offense: Stroud was a Heisman Trophy finalist who threw for 44 touchdowns. Smith-Njigba was nation's second-leading receiver and set Rose Bowl records with 15 catches for 347 yards and three TDs against Utah. Northwestern OL Peter Skoronski is a projected first-round draft pick.

Defense: Iowa LB Jack Campbell led the nation with 143 tackles. Wisconsin LB Nick Herbig's nine sacks are most among returning Big Ten defenders. Michigan S R.J. Moten becomes a full-time starter and is poised to stand out for a defense with lots of holes to fill.

No coach faces more pressure than Nebraska's Scott Frost. Long gone is the capital he built from his perfect season at Central Florida in 2017. He's 15-29 at his alma mater and there's no consolation in the fact 20 of the losses are by eight points or less. Anything less than a 5-1 start against a manageable schedule is a bad sign.

Indiana's Tom Allen and Rutgers' Greg Schiano are safe for now but need to step it up.

Following the Hoosiers' breakout 2020 season, the bottom fell out with injury issues leading to a 2-10 season that ended with nine straight losses.

Two years into Schiano's second Rutgers stint, his most notable accomplishments are playing Michigan within seven points on the road last year and taking the Wolverines to three overtimes in 2020.