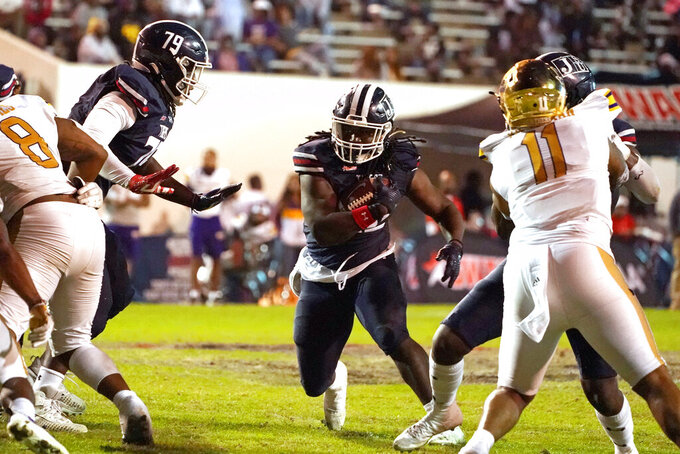 And Sanders' Tigers captured the title with a performance befitting his Hall of Fame versatility as a cornerback, receiver and returner: scoring touchdowns on offense, defense and special teams.

The victory capped off an impressive season for ‘Coach Prime," who earned SWAC coach of the year honors, shared the national spotlight with Alabama's Nick Saban and saw his son, Jackson State quarterback Shedeur Sanders named SWAC freshman of the year.

Not bad considering Sanders is just under 15 months into his first head coaching job. This is his first full season after a 4-3 spring campaign shortened by COVID-19 and despite missing three games following toe surgery. He navigated the sidelines with his left leg propped on a scooter that he sometimes sat on.

“This is unbelievable,” Sanders said. “We didn’t play best, but all our kids gave it our best. It’s one thing to win, but to win without me? Lord, I thank you.”

Sanders has also raised the profile of HBCU football and generated Name, Image and Likeness (NIL) opportunities for players. That’s in addition to growing his personal brand through national ads with Alabama coach Nick Saban and being mentioned as a candidate for FBS coaching vacancies.

After capturing its first league title since 2007, Jackson State's next stop is the Celebration Bowl against MEAC champ South Carolina State on Dec. 18 in Atlanta for the Black college national championship.

“We’ve got to finish what we’ve started,” Sanders said. “This journey that we’re on, we’ve got to finish it.” Sanders' enthusiastic embrace of NIL opportunities has helped JSU and SWAC players cash in with endorsements. The conference ranks 17th in the country in NIL compensation according to Opendorse.com, a platform that aims to help athletes monetize their brand.

They’re the only HBCU conference to crack the top 20 NIL endorsement rankings.

Sanders is getting a good run through entertaining commercial spots for Aflac insurance with Saban and the iconic Duck. Former Dallas Cowboys teammate and fellow Hall of Famer Troy Aikman has appeared at JSU along with recently deceased Memphis rapper Young Dolph and social media model and former JSU student Brittany Renner, who talked with players about social situations.

The players were apparently paying attention.

There was notoriety about new uniforms with players' names and rumblings of FBS coaching openings.

Through it all, Sanders' remained focused on shining a light on HBCU football and its players. SWAC Commissioner Dr. Charles McClelland believes he succeeded in that endeavor.

“He’s put additional eyes on HBCUs,” McClelland said before the game. “Make no mistake about it, I don’t think Eddie George is the coach at Tennessee State if Coach Prime wouldn’t have taken that step first.

That impact is significant. It transcends fans, it transcends sponsorships. It goes to the heart and soul and culture of who we are.”

The Panthers (7-5) led twice, including 10-7, before Isaiah Bolden returned a kickoff 91 yards for the go-ahead score in the second quarter. James Houston pulled in a nifty deflection for an interception and 5-yard return for a TD before Peytton Pickett rushed for a 5-yard TD late in the third quarter to give the Tigers some breathing room.

When it was all said and done Saturday, Sanders had once again taken center stage and put Jackson State, the SWAC and HBCU football in the spotlight.

“They just need the opportunity," the coach said. "At least give us a mention. Give us some type of respect. It’s for us to stand up for that. We must. The kids deserve it.”