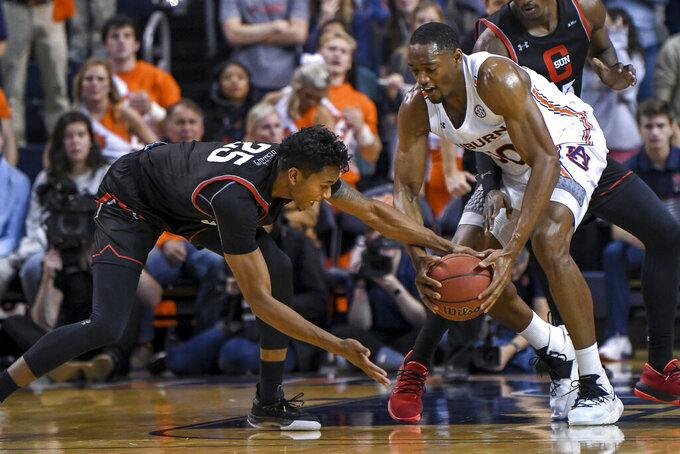 CSUN forward Jared Pearre (25) and Auburn center Austin Wiley (50) compete for a loose ball during the first half of an NCAA college basketball game Friday, Nov. 15, 2019, in Auburn, Ala. (AP Photo/Julie Bennett) 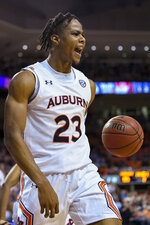 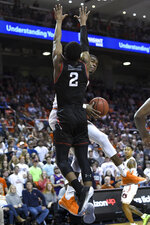 AUBURN, Ala. (AP) — Samir Doughty and No. 22 Auburn started clobbering Cal State Northridge much closer to the first shot than the last one.

Doughty scored a career-high 33 points, J’Von McCormick had a school-record 16 assists and the Tigers jumped up big early on their way to a 116-70 rout of the Matadors (0-4) on Friday night.

The Tigers (4-0), who needed a basket in the final seconds to beat South Alabama on Tuesday night, scored the first 11 points and led 66-38 at halftime.

“We overwhelmed our opponent, which we hadn't been able to do yet,” Auburn coach Bruce Pearl said.

Doughty made his first five 3-pointers and scored 22 by halftime against the Matadors.

The senior guard finished 10-of-15 shooting and made 6 of 8 3s. He also had eight rebounds. Doughty’s previous career best was 23 points against Duquesne when he was a freshman at VCU.

Terrell Gomez led Cal State Northridge with 23 points and made five 3-pointers. He was coming off a career-best 33-point game against Pepperdine.

“I know they had a tough game the other night at South Alabama, so they came out ready and anxious and excited to play,” CSUN coach Mark Gottfried said. “We would have probably struggled anyway but we’re a little short-handed.”

Reigning Big West player of the year Lamine Diane has been ruled ineligible this semester by the NCAA, pending an appeal.

McCormick had assists on five of Auburn’s first nine baskets and kept setting up scores from there, while committing only one turnover. Freshman Isaac Okoro, who hit the game-winner with 2.9 seconds left against South Alabama, scored 17.

CSUN newcomer Miles Brookins, a La Salle transfer who flew to Alabama Thursday night after the NCAA granted him a waiver, tore his left ACL in the second half, Gottfried said.

“It’s just heartbreaking for him,” the coach said.

CSUN: Fell to 0-6 against Southeastern Conference opponents. Were outrebounded 52-33.

Auburn: Has won 16 of its last 17 games dating back to last season’s Final Four run. Started 4-0 for the second straight season, something that hadn’t happened in 20 years. Hit 17 of 35 3-pointers.

Gottfried is very familiar with the Tigers and with former Auburn and NBA star Charles Barkley. He led rival Alabama’s program for 11 seasons, a tenure that ended with the 2008-09 season. Barkley spoke to the Matadors in the locker room after the game.

“He gave them a great message about education and listening to coaches,” Gottfried said. “I’ve known him so long and it’s just great that he came to talk to them.”

CSUN’s Harkless and Pearl both drew technical fouls. Harkless was whistled for flopping late in the first half and Pearl drew the whistle early in the second half.