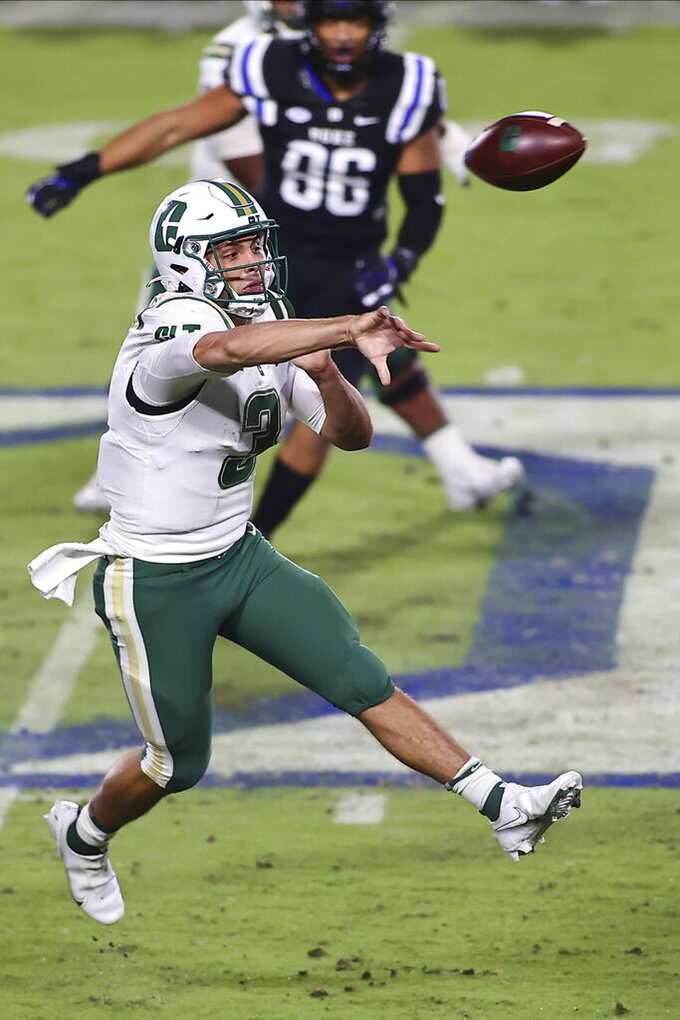 Charlotte quarterback Chris Reynolds (3) passes the football during the first half against Duke in an NCAA college football game Saturday, Oct. 31, 2020, in Durham, N.C. (Jaylynn Nash/Pool Photo via AP) 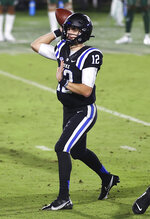 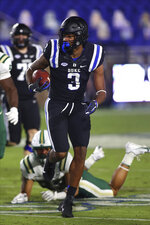 Duke’s Isaiah Fisher-Smith blocked two punts that set up quick scoring possessions for the Blue Devils (2-5), who won for the first time in three home games this season.

Durant gained 104 yards on 12 carries and Jackson picked up 101 yards rushing on 10 attempts. Chase Brice completed 8 of 14 passes for 106 yards and a touchdown.

None of Duke’s scoring possessions took longer than eight plays, and five of those consisted of four or fewer plays.

“That helps in any situation,” Brice said of the convenient field position created by special teams. “That helps put the ball in the end zone.”

Charlotte’s Chris Reynolds was 18-for-34 passing for 171 yards and a touchdown.

Jackson ran 65 yards on the second snap of the game for a touchdown. The Blue Devils extended the lead at the 6:10 mark of the first quarter on Durant’s 3-yard run, with Duke needing to go only 31 yards following a blocked punt.

“I think Duke executed very well and got after us,” Charlotte coach Will Healy said. “… We have to understand why this game got away from us like it did.”

Because of Duke’s quick strikes, the Blue Devils had the ball for only 17 minutes, 33 seconds compared to Charlotte’s 42:27. The short fields were ideal for Duke’s offense.

“Their backs ran really well,” Healy said. “They gnashed us.”

It marked the second time in a three-game span that Durant and Jackson both eclipsed the 100-yard mark in the same game.

“Those backs were really ready to go,” Cutcliffe said.

The 49ers (2-3) got on the board on Micaleous Elder’s 5-yard run in the second quarter to complete a 17-play march. Charlotte’s second touchdown came when it was ruled that receiver Victor Tucker wrestled the ball from cornerback Jeremiah Lewis in the end zone on a 6-yard pass from Reynolds with 5:50 left in the third quarter.

Per coronavirus-related restrictions on Duke’s campus, there were no fans in attendance.

Charlotte: The 49ers had scored first in their four previous games, outscoring opponents by a combined 31-7 in the first quarter. They didn’t get on the scoreboard until the 4:21 mark of the second quarter on Elder’s run.

Duke: The Blue Devils blocked a punt for the second game in a row – this time doing it twice. Just like in the game against North Carolina State, the first one came in the first quarter and was blocked by Fisher-Smith. He blocked a third-quarter punt and recovered the ball, leading to a Duke touchdown on the next play.

Cutcliffe said Fisher-Smith is savvy and that makes him an ideal player on special teams.

“He’s a unique young man,” Cutcliffe said, pointing out that Blue Devils seek to excel in special teams. “Anything to gain a winning edge.”

In the eight seasons in which the 49ers program has taken the field, there have been three meetings with Atlantic Coast Conference foes. Charlotte has lost each of those, falling by a combined margin of 175-45.

Charlotte: The 49ers visit Middle Tennessee next Saturday in a Conference USA game.

Duke: The Blue Devils are home against rival North Carolina next Saturday for their third consecutive game against an in-state opponent.