Even in defeat, Terps took a step forward against Michigan 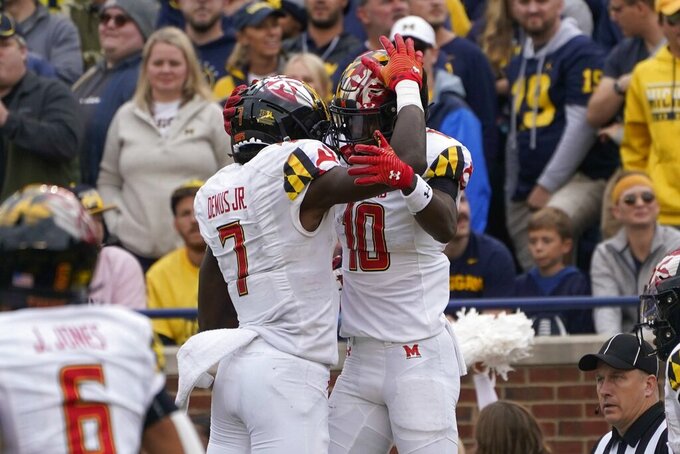 COLLEGE PARK, Md. (AP) — When the opening kick bounced off return man Tai Felton's helmet for a baffling turnover, Maryland seemed headed toward another face-plant against a top opponent.

These Terrapins, however, have a chance to be different.

Maryland ultimately lost 34-27 to No. 4 Michigan on Saturday, but for a program that's been average at best by Big Ten standards, there was a lot of progress in that defeat. Against a team they lost to by 41 points last year, the Terps had the ball and a chance to tie the game with 6:28 remaining.

“Anyone watching that game can see the growth of our program, ” coach Michael Locksley said. “Players see it, which is a testament to the investment that they make each and every day.”

As much as coaches and players try to avoid celebrating moral victories, they are meaningful when evaluating this Maryland team. After going 5-12 in Locksley's first two seasons, the Terps were 7-6 last year. It wasn't a huge surprise they lost to the likes of Iowa, Ohio State, Penn State and Michigan, but the scores in those games — 51-14, 66-17, 31-14 and 59-18 — suggested Maryland was pretty far away from reaching that level.

So by that standard — being competitive — last weekend's performance against the defending Big Ten champion represents incremental progress. The Terps (3-1, 0-1 Big Ten) led 13-10 late in the first half, and it took a 243-yard, two-touchdown rushing performance by Blake Corum to lift Michigan to the win.

It wasn't a perfect showing by Maryland. The fumble on the opening kickoff helped Michigan score a touchdown 8 seconds into the game. Terps quarterback Taulia Tagovailoa threw a couple interceptions, including a late one when his team trailed 27-19.

“Even though it was a tough loss, and you never celebrate those, I thought we did see improvement out of our team, which is what we've got to have,” Locksley said. “I know that we can play better, I know we can coach better. I think we all agree and know that.”

Most encouraging for Maryland was probably the defense, which kept Michigan largely under control aside from Corum. The Terps held their own against quarterback J.J. McCarthy and the Wolverines' talented receivers.

Tagovailoa was knocked around a bit and came out late in the game, and backup Billy Edwards led a touchdown drive. Locksley described Tagovailoa as a game-day decision this week, but that seemed mostly like a way of avoiding the question and keeping injury information secret. Tagovailoa, for what it's worth, said Tuesday he's 100%.

Whatever positives the Terps can take from the Michigan loss — and their three victories before it — they need to use October to build on that progress. This coming month, Maryland faces Michigan State, Purdue, Indiana and Northwestern. Those are all winnable games, and three of them are at home — including this weekend against the Spartans.

Michigan State (2-2, 0-1) is reeling after two straight losses, but the Spartans beat Maryland 40-21 last season. Payton Thorne threw for four touchdowns and Kenneth Walker III ran for two in that game. Thorne is still with the Spartans. Walker is in the NFL.

“The quarterback is a really good player,” Terps linebacker Ahmad McCullough said. “He has a really nice touch on the ball.”

After proving they could keep it close against a top-five opponent last weekend, the Terrapins want to avoid a letdown. Maryland is still a team coming off a loss, after all.

“We stood toe to toe with the reigning champion, but we're still not there," Locksley said. "We still have work to do as a program, but I'm proud of the way that our guys have responded after the loss.”