Finally back in Top 25, No. 20 Houston working to stay there 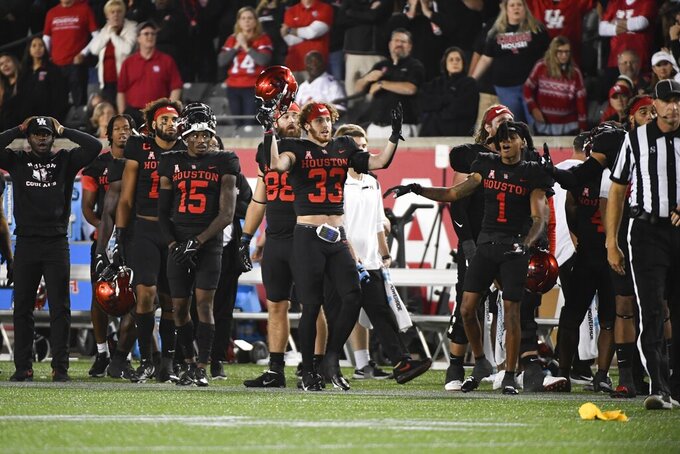 The Houston bench reacts to a flag on Houston during the second half of an NCAA college football game against SMU Saturday, Oct. 30, 2021, in Houston. (AP Photo/Justin Rex)

TAMPA, Fla. (AP) — No. 20 Houston is determined to stay in the Top 25 after being ranked for the first time in three years.

“I’m anxious to see how our team responds being in the position that we’re in,” coach Dana Holgorsen said, looking forward to Saturday night’s American Athletic Conference matchup against South Florida.

“We’re usually underdogs, and we’re usually playing with a chip on our shoulders,” Holgorsen added. “We’re in a little different spot, and we have to handle that if we want to continue to stay in the situation that we are in.”

Houston started 7-1 that season, too, before losing four of five games down the stretch.

The Cougars are 14-14 in three seasons under Holgorsen, who welcomes the added attention and expectations that come with being ranked.

“Your goal is to win, and if you do, then you’re eventually going to get ranked like that. You can’t avoid it, so you might as well embrace it. It’s good for the program,” Holgorsen said.

“We finally got to that point. It would be a shame to slip up right now and not do what our part is,” the coach added. “I’m just talking about preparation. Every game’s going to be a battle.”

South Florida (2-6, 1-3) is a 13½-point underdog, though Holgorsen describes the Bulls as “much improved” from a year ago, when the Cougars trounced them 56-21 at Houston.

“It’s a totally different team. They got a lot of guys back. They got some new guys that have stepped in and played a lot this year,” Holgorsen added “They play hard. They’re in every game. Close games against good teams that we’ve played.”

USF, in its second season under Scott, is beginning a tough, year-ending stretch that also includes games against second-ranked Cincinnati and intrastate rival UCF.

“Many people may look at that and see a lot of challenges and adversity, but I choose to see it as opportunity,” Scott said.

“Everybody’s got to take ownership in this. I feel like we went from a year ago where we probably didn’t belong on the field with them ... to now a year later and we belong,” the USF coach added. “But it’s not enough to belong. Now it comes down to playing well” and winning.

Houston’s seven-game winning streak is the school’s longest since the Cougars won eight straight spanning the 2015 and 2016 seasons.

Houston QB Clayton Tune threw for a career-best 412 yards and four touchdowns in the Cougars’ big win over SMU. WR Nathaniel Dell had nine catches for 165 yards and three TDs, however Houston didn’t seal the win until Marcus Jones returned a kickoff 100 yards for a clinching TD with 17 seconds remaining.