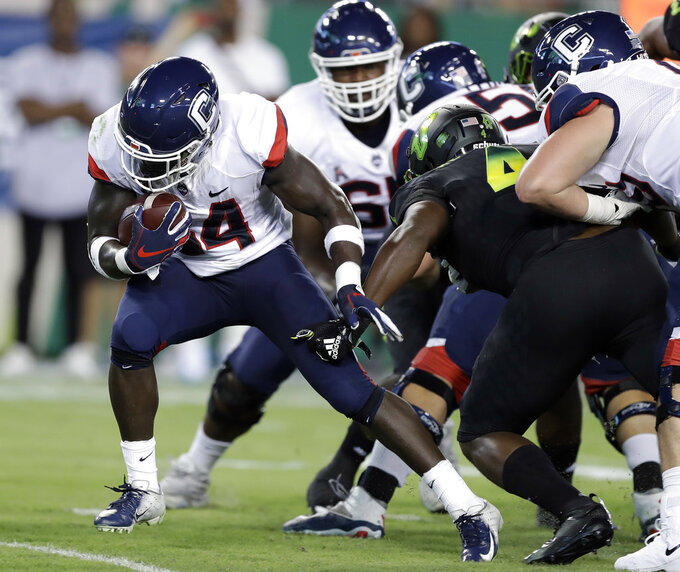 Connecticut running back Kevin Mensah (34) finds a hole in the South Florida defense to score on a 10-yard touchdown run during the first half of an NCAA college football game Saturday, Oct. 20, 2018, in Tampa, Fla. (AP Photo/Chris O'Meara)

Johnny Ford rushed for 164 yards and three touchdowns Saturday night, helping the Bulls pull away a halftime tie before holding on for a 38-30 victory over Connecticut.

"We should be much better than what are," coach Charlie Strong, said, noting the Bulls won again despite not putting together a strong all-around performance.

Ford scored on runs of 15, 15 and 43 yards. He also set up a second-half field goal with a 78-yard burst to enable the Bulls (7-0, 3-0 American Athletic Conference) match the best start in school history.

The Bulls also started last season with seven consecutive victories before losing to Houston. They get another shot at the Cougars on the road next week.

"If we play like we played tonight," Strong said, "we'll really get (embarrassed)."

With UConn entering the game yielding nearly 54 points per game, the heavily favored Bulls didn't seem to be candidates to trail 7-0 late in the second quarter.

But Barnett threw interceptions on USF's first two possessions, UConn turned the first one into a touchdown, and the Bulls offense was unable to get on track until Ford finished a seven-play, 80-yard drive with a 15-yard run that evened the score less than a minute before halftime.

It was only the second time all season that UConn, which has played more than 30 freshmen or sophomores in a rebuilding year under coach Rand Edsall, hasn't trailed at the half.

"People better catch us now because we're going to be good with all these young kids playing," Edsall said. "I'm proud of these guys and the way they got after it."

But the prospect for an upset faded early in the second half.

Randall St. Felix, who had two receptions for 123 yards, turned a quick sideline throw in front of the USF bench into a 75-yard on the first play from scrimmage of the second half. Two defenders whiffed trying to make the tackle, giving the speedy receiver a clear path to the end zone.

The Huskies trailed 31-14 before gradually working their way back into the game.

Pindell's second TD trimmed UConn's deficit to 38-30 with 2:24 left. And if not for an offsides penalty that denied the Huskies possession when they recovered the ensuing onside kick, things could have gotten very interesting at the end.

"They stayed confident for 60 minutes, and I'm not sure that always happened earlier in the season," Edsall said. "If we play hard and give that kind of effort, then we've got a chance."

UConn: Until Saturday night, the Huskies hadn't held an opponent to fewer than 49 points. Despite yielding 346 yards rushing, they were able to stay within striking distance much of the night with a productive running attack (322 yards) of their own.

USF: The Bulls did what they've done all season — win while looking vulnerable against almost everyone they play. The offense gained 611 yards, but was forced to settle for field goals attempts on two long drives. Defensively, they're bound to not be happy after allowing both Pindell and Mensah to rush for more than 100 yards.

If not for Ford's breakout performance, Cronkite's fifth straight 100-yard game would have garnered a lot more attention. He tied the USF record set by Marlon Mack in 2016 and matched by Quenton Flowers in 2017.

With No. 16 North Carolina State and No. 20 Cincinnati losing for the first time, USF is one of six unbeaten teams remaining in the Football Bowl Subdivision. The Bulls didn't earn any style points against UConn, though, so it won't be surprising if their climb is minimal in the next AP poll.

UConn: Home vs. UMass on Saturday

USF: At Houston on Saturday