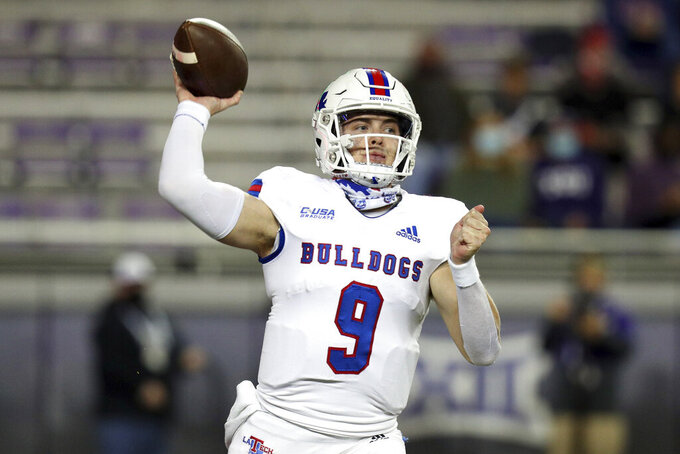 Louisiana Tech is looking to win a bowl game for the seventh year in a row. Georgia Southern is trying to secure its second bowl victory in three seasons, having defeated Eastern Michigan in the Camelia Bowl in 2018 before losing to Liberty in the Cure Bowl last year.

Georgia Southern: Dual-threat QB Shai Werts has accounted for 1,575 yards and 15 touchdowns from scrimmage. He leads the Eagles in rushing with 649 yards. A shoulder injury sidelined him for the team’s past two games, but he has returned to practice and could play in the bowl game.

Louisiana Tech's Skip Holtz is one win away from reaching his 150th career victory as a collegiate head coach. ... Louisiana Tech has not lost to a current Sun Belt Conference opponent since 1996, winning 18 straight such matchups. ... The Bulldogs have faced a Sun Belt team in a bowl game only once previously when they beat Arkansas State 47-28 in the 2015 New Orleans Bowl. ... This will be Georgia Southern’s fourth bowl game since moving up to the FBS and becoming eligible in 2015. ... The Eagles have scored five non-offensive touchdowns this season, including two on punt returns, one on an interception return, one on a blocked punt and one on a fumble return. ... The Eagles have forced 21 turnovers during the past nine games, including multiple turnovers in six straight. ... Georgia Southern is one of only two teams nationally to play as many as 12 regular-season games, along with Texas State, and the only one of those two to go to a bowl.

By John Zenor 8 minutes ago
By Pete Iacobelli 2 hrs ago
2 hrs ago
By Ralph D. Russo 6 hrs ago
By Ken Powtak 19 hrs ago