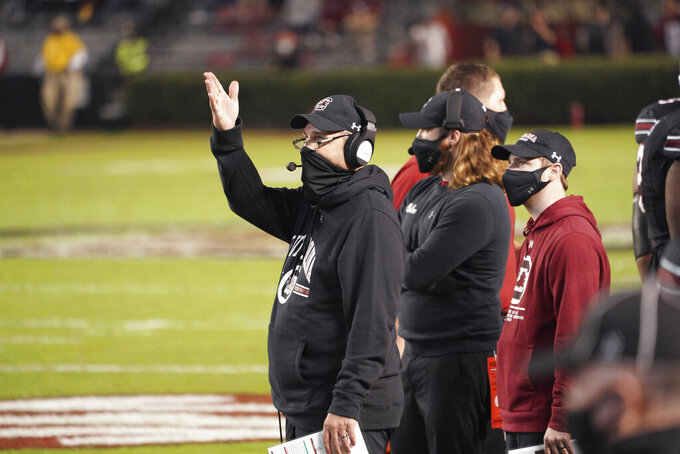 COLUMBIA, S.C. (AP) — Georgia coach Kirby Smart has gone from matching up at South Carolina with one close friend in Will Muschamp to another in Mike Bobo.

The three men were teammates at Georgia in the 1990s and have remained close throughout their college coaching careers.

Smart had won three of four games against Muschamp as the Gamecocks coach over the past four seasons. Now, it will be Bobo on the South Carolina sidelines Saturday night — Muschamp was fired two weeks ago — when the 13th-ranked Bulldogs (5-2, No. 9 CFP) play the Gamecocks (2-6).

“I respect both of them as coaches and as friends, and they know as well as I do when you get in this profession that’s a possibility that that happens,” Smart said.

Smart must gameplan for Bobo's imaginative and effective offense for the first time.

Bobo's strength is his attitude and energy, which is appealing to players, Smart said.

“He's grown up in a coach's family," Smart said. “He's got thick, tough skin and players like him.”

Bobo came to South Carolina after getting fired at Colorado State last season. Muschamp hired him as offensive coordinator and quarterbacks coach.

Bobo has spent much of his first week, rallying players and building confidence through the team's current four-game losing streak.

Bobo said he knows who'll start at quarterback this week. He's just not saying yet.

Georgia has a new quarterback that's stirred excitement, too, in Southern Cal transfer JT Daniels. The redshirt sophomore threw for 401 yards and four touchdowns in the Bulldogs 31-24 win over Mississippi State last week.

Some other things to watch when No. 13 Georgia plays at South Carolina:

Georgia's JT Daniels will present a huge challenge to South Carolina's secondary, which is still making up for the loss of NFL-caliber defensive backs Jaycee Horn and Israel Mukuamu. Both players opted out after Muschamp was let go.

The Bulldogs used a strong passing attack to get by Mississippi State a week ago. JT Daniels' 401 yards passing were the team's first 400-plus yard game since Aaron Murray in 2013. It's a good thing, too, for Georgia since the team's typically relentless ground game was held to 8 yards on 23 carries last week.

South Carolina interim coach Mike Bobo sounded a little like a Bulldogs alumnus (he is) when discussing his team's game with Georgia this week. “There’s more excitement in the air,” Bobo said. “Lot of history, there’s a lot of people I’ve known on the other side of the ball.”

Georgia coach Kirby Smart said that injured defensive tackle Jordan Davis is hopeful about returning to play South Carolina. The word is not as good on defensive back Richard LeCounte, out since a motorcycle accident after the team's win over Kentucky on Oct. 31. Davis hurt his elbow that game, too. Smart said “Jordan has a chance and that is promising.”

One of South Carolina's top playmakers in receiver Shi Smith is unlikely to play against the Bulldogs. Smith is third in the Southeastern Conference with 54 catches and 605 yards. He was hit hard in the first quarter and needed help getting up and to the sidelines. Interim coach Mike Bobo said Smith was in the concussion protocol and doubtful for Saturday.