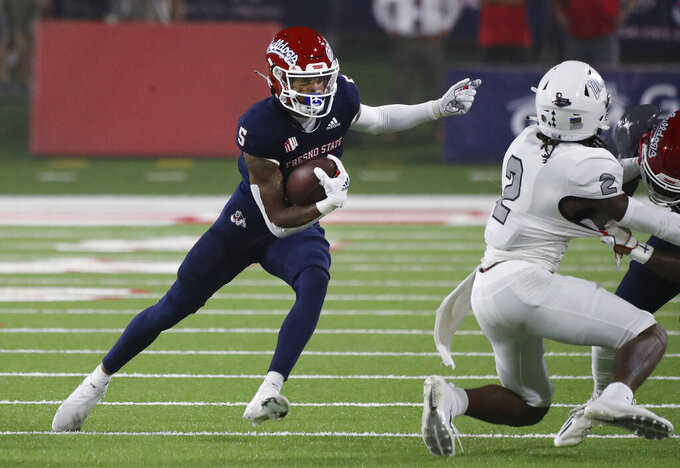 FRESNO, Calif. (AP) — When the game was on the line, Fresno State kept going to a familiar formula.

Jake Haener threw four TD passes in the second half to Jalen Cropper and No. 22 Fresno State rallied from a 12-point deficit to beat winless UNLV 38-30 on Friday night.

The Bulldogs (4-1, 1-0 Mountain West) started slow in their return to the AP poll for the first time since 2018 before Haener once again took over the game in the second half.

One week after throwing for 455 yards, including a go-ahead TD pass with 14 seconds left to Jalen Cropper, in a 40-37 win at No. 13 UCLA, that combo delivered again with four TDs in the second half.

Haener connected on scoring strikes of 4, 23 and 25 yards to Cropper on three straight possessions to turn a 21-9 deficit in to a 29-21 lead.

Arron Mosby then had a strip sack that Kwami Jones recovered, setting up a 31-yard field goal by Cesar Silva that made it 38-30 with 2:29 to play.

“It was a humbling moment for our team,” Mosby said. “Coming off a big win, you have people pumping your head in the sky and stuff like that. Going into conference play, everyone wants that title that we have. When adversity hit, it was great to to see our team keep fighting and come out with the victory.”

UNLV couldn't even get a first down on the next drive and dropped to 0-10 in two seasons under coach Marcus Arroyo.

“There's no moral victories. They know that,” Arroyo said. “We want that win, but we have to go find it. We’re disappointed, but I'm proud. We're going in the right direction.”

The Rebels scored on their first two drives of the game on a 10-yard strike from Doug Brumfield to Steve Jenkins, and then a 1-yard run by Charles Williams that capped a 95-yard drive that made it 14-0.

Fresno State got going a bit in the second quarter but had to settle for a field goal after stalling inside the 10 and then finally getting into the end zone on Haener's 18-yard pass to Brooks with 32 seconds left in the half to make it 14-9.

But the Rebels scored on an 80-yard screen pass from Brumfield to Tyleek Collins on the first play of the second half.

UNLV: The Rebels were playing a ranked team for the third straight week but were much more competitive this game than they were in getting outscored by 72 points by Arizona State and Iowa State. Brumfield threw UNLV's first two TD passes of the season to stake the Rebels to the 12-point lead, but then left with an injury. Cameron Friel came in and led the two late scoring drives but it wasn't enough.

Fresno State: The Bulldogs started slow but once again and got bailed out by big plays late from Haener. The defense got gashed on several screen plays, but got a couple of big stops late. They will need more complete performances when the conference schedule gets tougher.

“There’s some lessons we’re going to learn,” coach Kalen DeBoer said. “There are some things we’re going to be able to get better at from watching the film, but it’s obviously better to do that when you come off a win rather than a loss.”

Arroyo opted to punt twice in Fresno State territory in the second half to play the field position game, only to watch the Bulldogs drive for TDs both times.