High expectations for Dana Holgorsen in return to Houston 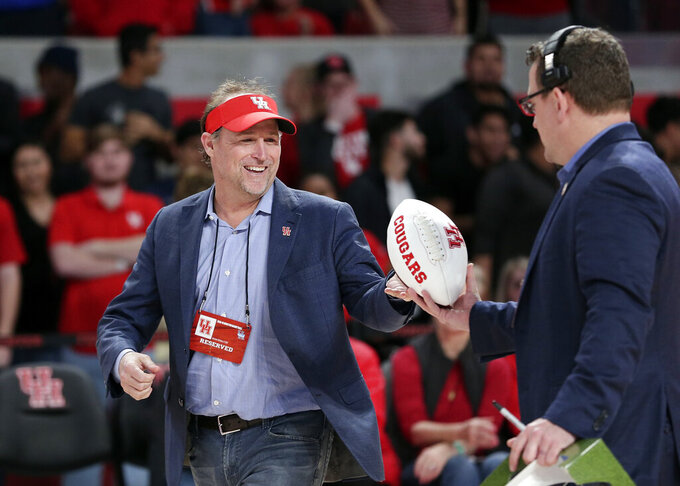 FILE - In this Jan. 2, 2019, file photo, Dana Holgorsen, the newly named football coach for the Houston college football team, gets autographed footballs to toss to the crowd as he is recognized during halftime of an NCAA college basketball game between Tulsa and Houston, in Houston. (AP Photo/Michael Wyke, File)

HOUSTON (AP) — Coach Dana Holgorsen is thrilled to be back in Texas with the Houston Cougars after eight years in West Virginia.

As the Cougars went through spring football practices, it didn't take long for him to be reminded of one of the reasons why he enjoys coaching in the state so much.

Holgorsen made the rare move from a Power Five school for one outside the high revenue conferences by returning to the university where he spent 2008-09 as offensive coordinator under Kevin Sumlin. He's the first coach to willingly make such a move since the College Football Playoff began in 2014.

He had a successful run with the Mountaineers, going 61-41 and earning a bowl berth in seven of eight seasons, including his last five. Holgorsen inherits a team that went 8-5 last season, but fired Major Applewhite after his second season following Tom Herman's departure for Texas.

The Cougars, who have been to six straight bowl games, have had two of the most successful seasons in school history in the last decade, posting a school-record 13-1 mark in both 2011 and 2015. Holgorsen knows that people are looking for him to replicate that kind of success.

"We know we've got good players," Holgorsen said. "We better have good players, the expectations are high. This is a program that's used to winning. So our guys are confident, they're eager, they like football."

While Holgorsen and his new staff have plenty to teach the players, their focus this spring was less on Xs and Os and more on building relationships.

"Getting to know them is the main point," he said. "The more that we communicate with them and coach them and teach them and get them to understand that we care about them not only as players but as people as well then the easier it is to get them to go (play hard) for you."

West Virginia was Holgorsen's first head coaching job after several stints as an assistant at schools including Mississippi College, Texas Tech and Oklahoma State. He believes the lessons he learned about building and molding a program at West Virginia will help him in his move to Houston — or least keep him from repeating the things he didn't do right.

"That was an eight-year test run on how to be a head coach," he said. "So I don't even have to go back and think and look at all the things that I screwed up early. I know there was a lot and I'm sure I'm going to make mistakes here as well, but it's a lot smoother now."

Holgorsen's team includes 24 players who started at least part-time last season, including eight players on offense who have started 10 games or more. That group is led by quarterback D'Eriq King, who has started 22 career games and who threw for 2,982 yards and 36 touchdowns last year.

King is healthy after having surgery to repair a torn meniscus in his right knee in November and has made a great first impression on Holgorsen.

"In the meetings he understands things," Holgorsen said. "He verbalizes things back to us that he understands what we're talking about and I think that's just because of his experience and the amount of football he's played. You've got to be calm at that position — calm and intelligent and I see that in him."

On the other side of the ball the team looks to move on after defensive tackle Ed Oliver declared for the NFL draft after his junior season. He is expected to be a top-10 pick.

Holgorsen and the Cougars face a huge early test with a visit to Oklahoma for their season opener on Aug. 31.