Hoosiers looking for a turnaround after dismal 2021 season 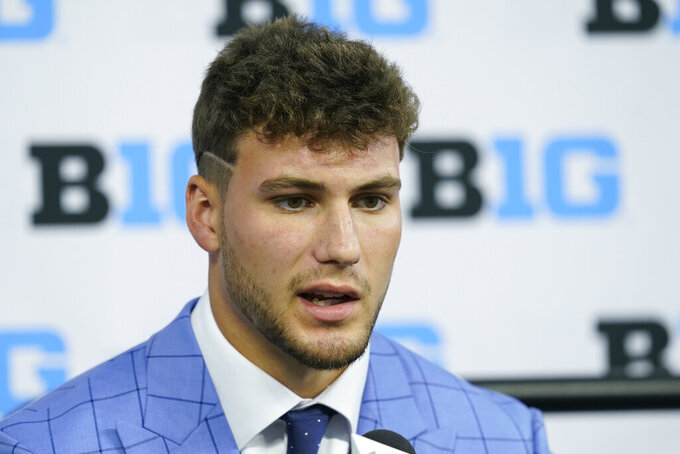 Indiana linebacker Cam Jones and quarterback Jack Tuttle took matters into their own hands this offseason.

They called their teammates together to discuss the goals and aspirations of the program, the need to always play with an edge and to break down precisely why things went wrong in 2021.

Now they're using the lessons from a players-only PowerPoint session to avoid a repeat this fall.

Or in this case, perhaps, a great season.

Of course, that was the Hoosiers' plan last fall, too. But after opening the season in the Top 25, a string of injuries and embarrassing losses ensued. The result: Two wins, none in Big Ten play, a humiliating 44-7 season-ending loss at rival Purdue and months of reflection.

It led to a flurry of changes.

Starting quarterback Michael Penix Jr. left for Washington while Connor Bazelak, the 2020 co-SEC freshman of the year, arrived from Missouri. Bazelak and Tuttle will compete for the No. 1 job.

“Last year was something that was really, really hard and it’s something I never want to go through again,” Allen said. “At the same time it makes you appreciate how hard it is to be at a certain level.”

Allen also knows the turnaround begins inside the locker room. He believes the work by Jones and Tuttle already has made a difference.

“Man I was fired up. I knew right then that things were going to be different,” Allen said. "It’s never big things. But I’m telling you there’s just some little, subtle stuff that I feel they recognized and they saw and noticed we talked about. I don’t think I can put a value on it.”

Tuttle has made four starts in 14 career games and has been a steadying influence since coming to Indiana in 2019. But Bazelak completed nearly two-thirds of his throws at Missouri, passed for 5,058 yards and 23 touchdowns while throwing 17 interceptions in 24 games, and he may have the edge with a new coordinator.

“I would say experience, just a calmness and a coolness, doesn't get frazzled, not real emotional,” Allen said when describing what he's seen from Bazelak. “The thing that out to me is just experience — been there, been in the big games, played in the big venues.”

Allen, like other coaches, is hoping college officials do more to to prevent in-season transfers. On the subject of names, image and likeness compensation for athletes, though, Allen is doing his best to keep the Hoosiers competitive.

“It’s not going away,” he said. "The programs and alumni bases, fundraising that can figure it out and get people involved, are going to be the ones that thrive. Who knows what the future holds, but I know we have to embrace it. We have to continue to grow the participation in it.”

Injuries forced the Hoosiers to use four different starters at quarterback last year but the most devastating absence may have been cornerback Tiawan Mullin.

In 2020, he was named first team all-conference and also received national honors. Last year, he missed five games with injuries and only made four starts. Now he says he's healthy and ready to go.

The Hoosiers need to build momentum with a strong start and it all begins against a Big Ten foe in the Illinis under Friday night lights.

By late September, the usually challenging schedule kicks in. Indiana visits Cincinnati and Nebraska in back-to-back weeks, and then plays at Ohio State and Michigan State in consecutive weeks in November. Michigan, Penn State and Purdue all visit Bloomington this year.,