Hoosiers try to salvage tough season with win over Gophers 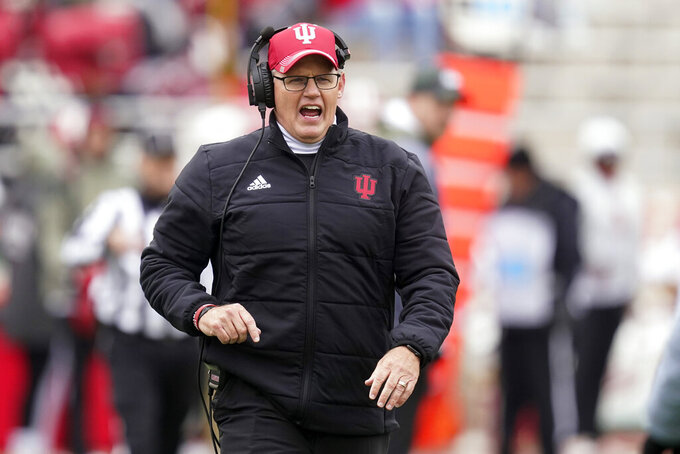 Indiana head coach Tom Allen talks with an official during the first half of an NCAA college football game against Rutgers, Saturday, Nov. 13, 2021, in Bloomington, Ind. (AP Photo/Darron Cummings)

So he spent this week looking for solutions.

He called on players to prepare better, play with more effort and eliminate the mistakes that led to six turnovers and another embarrassing loss. And even in the midst of a lost season, Allen believes the Hoosiers can salvage something valuable in Saturday's home finale against Minnesota — like a first Big Ten win.

“They’ve earned the right for us to finish strong and play with the level of intensity, toughness, and passion that I know is the standard here," Allen said. “That’s what I expect our guys to do."

This will be no typical farewell celebration for the seniors, either.

Also unclear is how many players who participate in the annual farewell festivities may return next year.

“It is unique," Allen said. “I mean, there’s always a little bit of that in some ways with a guy if he’s going to decide to come back or not, but we’ve never in the history of our game had this number because of the COVID-19 situation we all went through. Everybody got an additional year. Whether this is officially their last time or not, they’re all part of a group that came here, believed in what we were building before we actually did it."

Since winning four straight in October to become bowl eligible, Minnesota has lost back-to-back games while scoring just 28 points. Like Allen, Gophers coach P.J. Fleck didn't like what he saw last weekend, either, especially on offense.

Fleck has challenged his team to clean up their performance, too, against a team he believes poses a real challenge to building momentum for the final three games.

“We’re treating them as an 8-2 football team, not 2-8," Fleck said. “They’ve lost six games to top 20 teams. This last game, they turned it over six times and that’s not going to happen again."

Fleck hasn’t wavered in his commitment to fifth-year quarterback Tanner Morgan, who was a second team All-Big Ten choice in 2019 and honorable mention last season. This season, Morgan has only one TD pass in the last four games, and his 57.7% completion percentage is a career low.

Morgan’s first career start came against Indiana in the rain in 2018, when he threw for 302 yards and three TDs including the tiebreaking 67-yard score with 1:34 left in the game.

“I love this university and I love to play football here, and it’s my job to play better,” he said.

Allen has already begun to ask what went wrong this season and one component is injuries. Earlier this week, he noted the Hoosiers have had 30 players sit out games, 18 of whom had season-ending injuries. It's a long list that includes some of Indiana's most important players on offense and defense.

“Those are things we’ve got to look at," Allen said. “We’ll just look at this whole program from top to bottom and just make those corrections and press on."

Those numbers could improve this weekend against the Hoosiers stagnant ground game. Indiana has averaged 117.5 yards per game and 3.2 per carry. And Indiana’s top runner, Stephen Carr, already has been ruled out of the second straight week an injured ankle. Former walk-on Davion Ervin-Poindexter could get the start.

Minnesota left guard Conner Olson is expected to break the Big Ten record for career starts with No. 56 on Saturday. Ohio State center Billy Price set the previous mark at 55.

It wouldn't have come without the NCAA granting an extra year of eligibility because of the COVID-19 season. Olson has started every game since Fleck arrived in 2017 and plans to attend medical school when his football career ends.