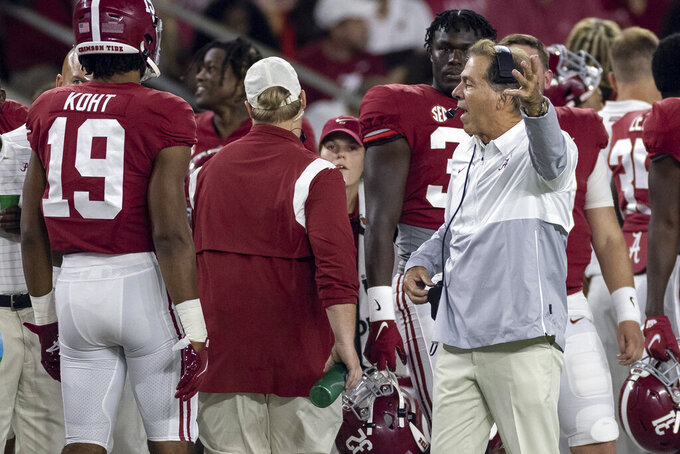 Alabama head coach Nick Saban expresses disappointment on the sidelines after Alabama surrendered a touchdown to Southern Mississippi during the first half of an NCAA college football game, Saturday, Sept. 25, 2021, in Tuscaloosa, Ala. (AP Photo/Vasha Hunt)

Lane Kiffin knows what it takes to beat Alabama: Just about everything has to go right.

The Mississippi coach and former offensive coordinator for the top-ranked Crimson Tide knows teams can’t match them five-star recruit for five-star recruit. Kiffin’s 12th-ranked Rebels and the nation’s most prolific offense are the latest to take on the challenge on Saturday.

“Because obviously as we’ve seen every (NFL) draft, they’ve got better players than everybody else in the country.”

But the Rebels have quarterback Matt Corral directing an offense that leads the nation averaging 635.3 yards and 52.7 points per game. And they gave ‘Bama’s defense fits last season in an unTide-like 63-48 victory.

It was the highest-scoring SEC regulation game ever and no team had ever put up as many yards against an Alabama defense as the Rebels' 647.

The Rebels have wins over Louisville, Austin Peay and Tulane and this Saturday will get the chance to show if they're legit SEC West challengers to the Tide.

“I evaluate it like this: I don’t believe there’s anybody that can beat us but ourselves,” Ole Miss tailback Jerrion Ealy said. “So if we go out there and don’t beat ourselves, we’re in good shape."

Corral and Young are the early front-runners for the Heisman Trophy, according to FanDuel Sportsbook.

They're both former five-star prospects who came to the SEC from Southern California and have lived up to their billing. Young and Corral are the two highest-rated passers in the league. Corral has thrown for nine touchdowns and rushed for five with no interceptions. Young has thrown for 15 touchdowns with only one interception that bounced off his receiver's chest.

The quarterbacks get much of the attention, but both teams have multiple running back threats, too. Saban is expecting Brian Robinson to return after missing the Southern Miss game with a rib injury, but Jase McClellan, Roydell Williams and Trey Sanders have also made some big plays.

Ole Miss counters with Ealy, Henry Parrish Jr. and Snoop Conner. Corral is also a running threat who Saban calls “as athletic as anybody you’re ever going to play against at that position.”

“A lot of things come off their running game, which makes it really difficult for defensive players,” the Alabama coach said.

Saban is 23-0 against his former assistants with Kiffin and Texas A&M’s Jimbo Fisher up next. That includes two matchups with Kiffin, last season at Ole Miss and in 2009 against Tennessee.

“There’s a reason he’s the best in the history of college football,” Kiffin said. “Even when people know how his place works, he’s still undefeated, which is amazing.”

Beware, Alabama. No team has converted as many fourth-down attempts as Ole Miss this season. The Rebels’ 12 conversions in 14 attempts lead the nation.

This will be the Rebels' first game this season at an opponent's home stadium. With limited crowds last season because of the COVID-19 pandemic, the 100,000-plus fans at Bryant-Denny Stadium could come as a shock to some younger players.

Corral, though, looks forward to his first game action in Tuscaloosa.

“I love when the crowd’s crazy,” he said. “I love that regardless of it is ours or not ours. Having that energy, I love it. That’s college football.”