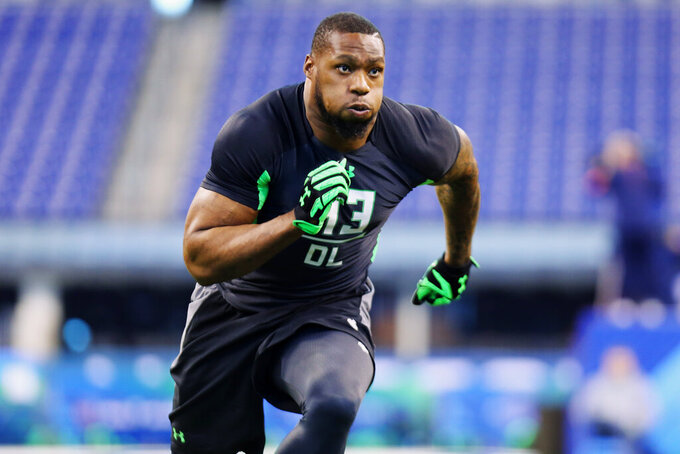 FILE - In this Feb. 28, 2016, file photo, Baylor defensive lineman Shawn Oakman performs a drill at the NFL football scouting combine Feb. 28, 2016, in Indianapolis. A Central Texas jury on Thursday, Feb. 29, 2019, found the former Baylor football player not guilty of raping another student in 2016, the latest case linked to a scandal that rocked the nation’s largest Baptist university and led to the departure of several top leaders. (AP Photo/Gregory Payan, File)

WACO, Texas (AP) — A Central Texas jury on Thursday found a former Baylor University football player not guilty of raping another student in 2016, the latest case linked to a scandal that rocked the nation's largest Baptist university and led to the departure of several top leaders.

The woman who says she was raped testified earlier that she'd been drinking and was intoxicated when Oakman assaulted her. She said she told Oakman that she wanted to leave his duplex that night but he wouldn't allow it.

Oakman's attorney told jurors that the two wanted to be together that night and that they had consensual sex.

Oakman's family and friends had huddled in prayer during the deliberations and screamed in glee when the verdict was read. Oakman cried and hugged his attorneys.

Oakman, 26, is the Bears' career leader in quarterback sacks.

Baylor University was accused of failing for years to properly investigate sexual assault allegations involving students. Football players Tevin Elliott in 2014 and Sam Ukwuachu in 2015 were convicted of sexual assault.

The scandal surrounding the football team resulted in the firing in 2016 of then-football coach Art Briles and the resignation of Athletic Director Ian McCaw. University president Ken Starr was demoted and then resigned.

The university since then has settled several lawsuits from women who said their allegations of sexual assault by football players were mishandled or ignored.

Baylor officials settled a federal lawsuit last year involving a former volleyball player who said she was drugged and gang raped by members of the football team in 2012.

A former Baylor student accused of raping a woman at a fraternity party was granted a plea deal in December that let him avoid serving jail time.

This version of the story corrects that Ian McCaw resigned.