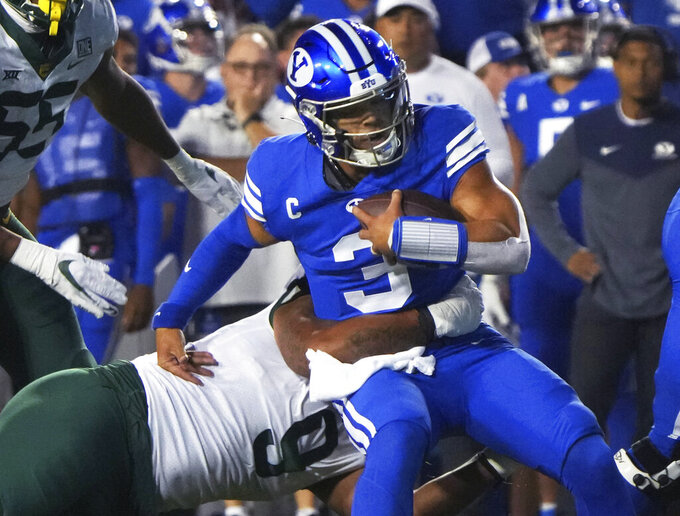 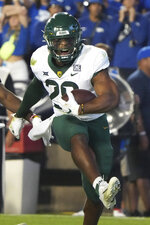 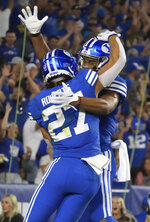 PROVO, Utah (AP) — BYU fought for every inch on offense against Baylor. Lopini Katoa carried the Cougars across the finish line.

Katoa barreled into the end zone on a 3-yard run to lift No. 21 BYU to a 26-20 victory over the ninth-ranked Bears in double overtime on Saturday night.

The Cougars (2-0) tallied just 83 yards on 33 carries. They refused to give up on running the ball and ground out a game-winning touchdown in the end.

“That’s a tough defense right there,” said Katoa, who finished with 26 yards on nine carries. “They pride themselves on stopping the run. They do a great job at it. Me and Chris (Brooks) both knew we were going to have to scratch and claw for every yard.”

Blake Shapen threw for 134 yards and a touchdown while Qualan Jones added a pair of touchdown runs for Baylor (1-1). Jones and Craig Williams combined for 135 yards on 33 carries.

Shapen’s incompletion on fourth down in double overtime sealed the upset win for BYU. The Bears were one of three Top 10 teams to lose on Saturday along with No. 6 Texas A&M and No. 8 Notre Dame.

“The biggest way you lose games is by hurting yourself and we hurt ourselves two times in critical situations,” Bears center Jacob Gall said.

Baylor kicker Isaiah Hankins missed a 43-yard field goal attempt in the first overtime after missing a PAT on the Bears' only first-half touchdown. Cougars kicker Jake Oldroyd missed a 35-yard attempt with 8 seconds left in regulation and then missed from 37 yards to force a second overtime.

“I told him he has no reason to hang his head,” Katoa said. “He’s kept us in so many games in the past. He’s won games for us in the past.”

The Bears jumped in front 6-3 after Jones punched it in on a 1-yard run. His touchdown capped off a 13-play, 68-yard drive where Baylor converted a pair of third downs.

The Cougars answered as they covered 75 yards in eight plays, culminating in a 20-yard touchdown pass from Hall to Chase Roberts to take a 10-6 lead. Hall completed five of six passes on the drive. Each play gained at least 11 yards.

Both teams carried their offensive momentum into the third quarter.

Jones shed tacklers to score his second touchdown on a 7-yard run and give Baylor a 13-10 lead. He also had a 12-yard catch on third down during the drive.

After tying the score on a 39-yard field goal from Oldroyd, BYU dug into its bag of tricks to retake the lead. Roberts tossed a backward pass back to Hall and he raced 22 yards to put BYU back in front 20-13.

Baylor: Success on third down helped the Bears get through some tough stretches on offense. The Bears went 9 for 18 on third down. Defensively, Baylor held the Cougars to 3 for 14 on third down.

BYU: With starting receivers Puka Nacua and Gunner Romney sidelined with injuries, the Cougars made up for it by getting tough on defense. BYU sacked Shapen four times for a loss of 22 yards and had six tackles for loss overall.

BYU used last year’s 38-24 loss to Baylor in Waco, Texas, as a barometer on where it needed to improve. Cougars coach Kalani Sitake urged his players to transform their bodies and grow stronger in the offseason. He liked what he saw from his team on Saturday as BYU allowed only 3.6 yards per play on defense while averaging 5.0 yards per play on offense.

“From last year’s game, I made statements that we got to learn from that. We’re going to see them again,” Sitake said. “I wanted to see improvement in our team and in our program from everybody and I saw it.”

The Bears were flagged for 14 penalties, losing a total of 117 yards. The infractions derailed some Baylor drives and kept some BYU drives alive.

“We have to be able to not hold on critical pass downs,” Bears coach Dave Aranda said. “We’ve got to be able to play through the down and not have a pass interference on critical downs. We had 14 penalties, which is way too much.”

Baylor will likely drop in the AP Top 25, while BYU will climb several spots after upsetting a Top 10 foe at home.