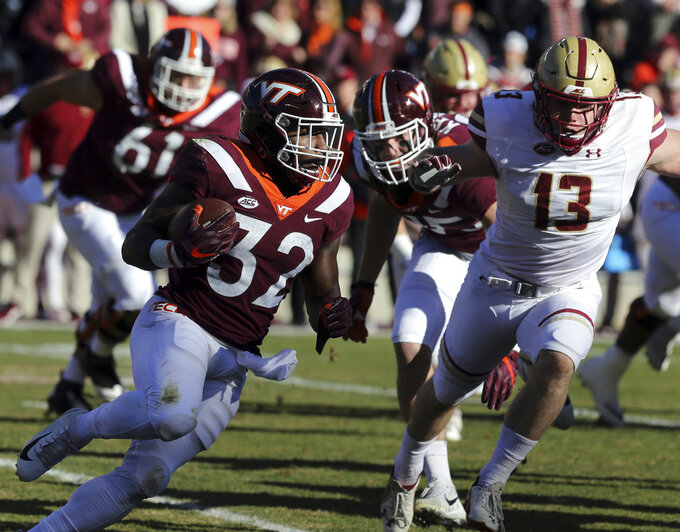 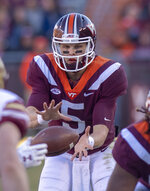 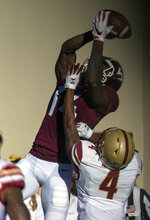 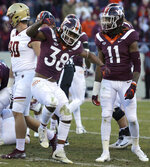 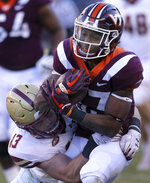 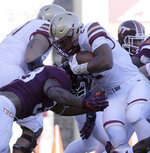 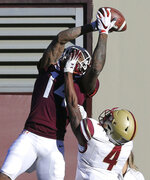 BLACKSBURG, Va. (AP) — Travis Levy went from a lightly used backup to the focal point of No. 24 Boston College's run-first offense, and he responded by running the Eagles into one of their biggest games in years.

Taking over after star AJ Dillon tweaked an ankle injury, Levy for ran 75 yards and two touchdowns as Boston College beat Virginia Tech 31-21, setting them up for a huge home game against No. 2 Clemson next week.

"I'm ready every game," the sophomore said. He started the day with just 29 carries for 102 yards with no touchdowns in the first eight games. "Next man up mentality. That's what it is."

Dillon added 96 yards and a touchdown for BC (7-2, 4-1 Atlantic Coast Conference, No. 22 CFP), which will face the Tigers with first place in the ACC's Atlantic Division on the line.

"We have an opportunity to play the No. 2 team in the country that's playing lights out football," BC coach Steve Addazio said.

The Eagles looked pretty good in their tuneup, limiting the Hokies to 32 yards in the third quarter and erasing a 14-7 deficit with 21 unanswered points after halftime.

"The second half, everyone felt the energy throughout the locker room," said BC's Brandon Sebastian, who had a key interception. "We just kept swinging and stayed in there and put them away."

Levy scored on a 29-yard run midway through the third quarter to tie the game at 14, and his 1-yard run with 8:51 to play made it 28-14. In between, Anthony Brown got them the lead with a 22-yard TD pass to Korab Idrizi after an interception by Sebastian.

On the interception, Willis hit Damon Hazleton but the ball went off the receiver and right into the hands of Sebastian.

Willis completed 25 of 42 passes and ran for 49 more yards. His touchdowns — 26 yards to Hazleton, 4 yards to Eric Kumah and 14 yards to Tre Turner — all came when he threw the ball in their direction in one-on-one coverage. But the Hokies gained just 111 yards on 36 carries.

"In this game, if you can only do one thing, they won't let you do that for very long," coach Justin Fuente said.

Both quarterbacks missed on what could have been long scoring passes. Brown had Michael Walker well behind the secondary but overthrew him on what would have been a 90-yard play in the second quarter, and Willis underthrew Turner in the middle of the field on a would-be 79-yard scoring play in the third quarter.

Boston College: The Eagles' play-calling was curious at times. Dillon ran for three and then 17 yards on their first two plays, but three consecutive pass plays that followed yielded only a yard and a punt. Dillon carried seven times — half his first-half total — on their lone scoring drive before halftime.

Virginia Tech: The Hokies already inexperienced defense has been worn thin by injuries. They began the day with leading tackler Rayshard Ashby dressed but not playing, nose tackle Jarrod Hewitt and OLB Dylan Rivers also sitting out with injuries and No. 2 tackler, LB Khalil Ladler, missing the first half because of a targeting call. They then lost cornerback Bryce Watts to a broken forearm and backup nose tackle Xavier Burke to an Achilles injury.

Addazio had an amusing answer when asked if he's seen how Clemson fared earlier in the day. They beat Louisville 77-16.

"I did see it flash up on the board," he said. "I think it was 77? You just want to ruin my night. Can I enjoy this game, maybe get on the plane and have one of those awful sandwiches, just feel good for a few minutes?"

Virginia Tech heads onto the road to face Pittsburgh still with a chance in the Coastal Division matchup.