Miami has experience, and that could be the key in 2021 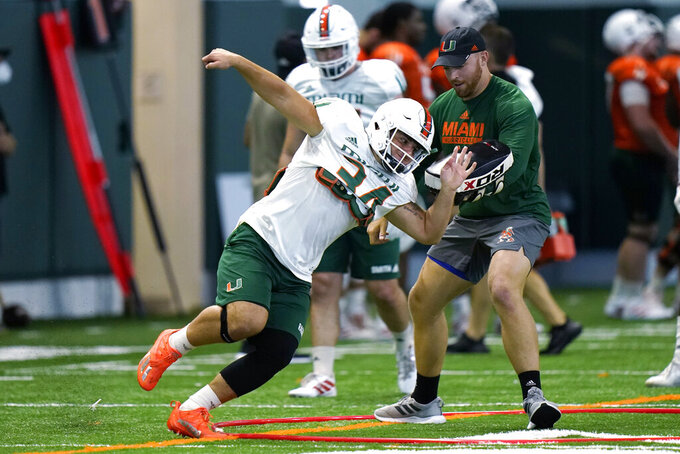 CORAL GABLES, Fla. (AP) — Plenty of Miami players had decisions to make when last season came to a close, and the time had come to choose whether to pursue the NFL or remain with the Hurricanes for one more season.

For some, it was not easy.

And then quarterback D’Eriq King made up his mind. He was staying. It all seemed to fall into place from there.

The Hurricanes are hoping to play games that matter in January 2022 because of the choices that were made in January 2021, when the likes of King, wide receiver Mike Harley, offensive lineman Jarrid Williams and defensive stalwarts Zach McCloud, Jon Ford and Amari Carter all decided to come back for another senior season — permissible by the NCAA’s ruling that essentially said the 2020 season didn’t count because of difficulties caused by the coronavirus.

“That’s the thing that had not been happening at Miami,” Hurricanes coach Manny Diaz said when asked about that many experienced and key players returning. “It became the thing to do, and for the right reasons.”

Miami had a chance to play in the Orange Bowl last season, then got rolled by North Carolina in the regular-season finale and settled for a spot in the Cheez-It Bowl. King tore his ACL in that game, Miami got behind big early and wound up losing 37-34 to finish the season 8-3.

But with so much experience back — and with King back on the field earlier than some expected — optimism is high at Miami yet again.

King completed 64% of his passes last season and built great chemistry with top receivers like TE Will Mallory and Harley, both of whom are going to be asked to play big roles. Newcomer WR Charleston Rambo, a transfer from Oklahoma, could be big for Miami as well. On the ground, only three returning FBS players — Hawaii’s Calvin Turner Jr. (36), Fresno State’s Ronnie Rivers (35) and Shai Werts (34), who was a quarterback at Georgia Southern before transferring to Louisville and becoming a wide receiver — have more career rushing touchdowns entering 2021 than King does with 32. If the knee lets him be a true dual-threat again, Miami should score plenty.

Diaz is going back to his defensive-coordinator roots and will call the defense this season, after Miami took a step back defensively in 2020 -- particularly at season’s end. He’s trying to downplay it, but it’s a big move for the Hurricanes. “That is all going to be about the players,” Diaz said. “It’s fun to talk about the coaches and the playcalling, this, that and the other. But great defense is ultimately about the connection between the players on the field, the trust and the accountability.”

Going down the middle might not be a great option for opponents in the pass game. Miami boasts three very good safeties in Carter, Bubba Bolden and Gurvan Hall, plus the Hurricanes are exceptionally high on the potential of true freshman James Williams — one of the top South Florida recruits that Miami has landed in recent years.

Miami should be more than fine in the kicking game. Lou Hedley may be the best punter in the country, and the placekicking duties will be assumed by Andres Borregales. His brother Jose Borregales kicked for Miami last season as a graduate transfer, winning the Lou Groza Award and more than shoring up what had been a major weak spot for the Hurricanes for several years. “We feel like we have the best group of specialists in America,” Diaz said. The Hurricanes hope to use speed more in the return game this season; they got nothing out of punt returns in 2020 and were average on kick returns.

It’s a doozy. Opening with Alabama — excluding last year’s virus-affected slate the Tide have started with a neutral-site game in eight consecutive seasons, going 8-0 in them by a combined score of 313-94 — is just the start. Miami plays North Carolina and Florida State on the road, but those are two of only four true away games for the Hurricanes this season.