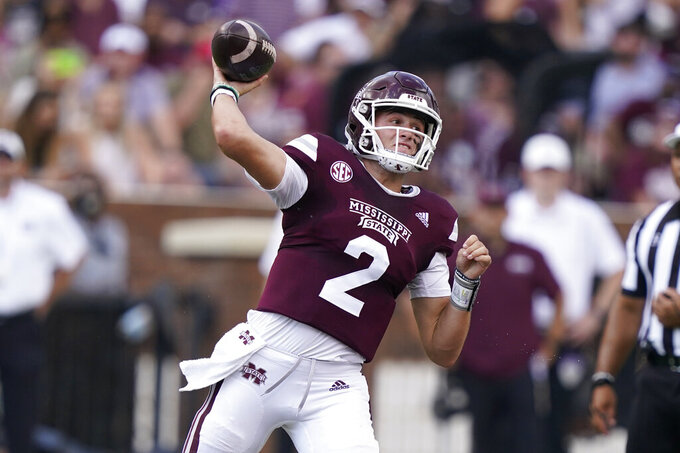 He hopes that facing North Carolina State spurs his team to put it all together for 60 minutes.

The Bulldogs built a 14-0 lead against Louisiana Tech, then yielded 34 unanswered points before mounting the biggest comeback in school history for a 35-34 opening-game win. Historic as that was, Mississippi State must avoid rollercoaster play on Saturday night in Starkville against a Wolfpack squad that steamrolled South Florida 45-0 in its opener.

“We definitely have to get better this week,” Leach said, noting N.C. State’s defense, energy and experience.

“We just have to focus on ourselves and be the best team that we can be out there. That’s all we really have control over. If we do our job the best we can, that gives us the best chance.”

Staying focused throughout is one way the Bulldogs can have a chance after squandering the lead and momentum before reclaiming both against Louisiana Tech. Avoiding the turnovers and penalties will also help in the second of three challenging nonconference contests.

The Wolfpack are coming off their first season-opening shutout since 2004 and first against a Bowl Subdivision team since 2011. Coach Dave Doeren was encouraged by the maturity from his veteran squad, which returned 18 starters from an eight-win team.

North Carolina State’s offense was crisp, getting a dominating ground game from Zonovan “Bam” Knight and Ricky Person Jr. Quarterback Devin Leary returned from a broken leg that sidelined him at midseason and got stronger as the game went on.

A Wolfpack victory will help the Atlantic Coast Conference salvage something after three opening-game matchups against the Southeastern Conference. While the Wolfpack are focused on their own play, saving face for the ACC can’t hurt.

“We’re playing another Power Five team from a conference that gets a lot of notoriety,” said Doeren, whose team will visit Starkville since winning 6-0 there in 1931. “And it’s an opportunity for us to continue to earn respect.

“Obviously, playing on the road against a team like that from their league, if you find a way to win that game, it’s good for your team, good for your program.”

Some other things to watch as North Carolina State visits Mississippi State:

Mississippi State fans are known for ringing a cowbell during games, and N.C. State knows it must prepare for the noise. Linebacker Isaiah Moore even went as far as bringing one in for media interviews this week and ringing it as offensive lineman Dylan McMahon was wrapping up his Zoom session.

“Dylan’s an O-lineman, they’ve got to deal with that cowbell noise coming up,” Moore said. “So I thought I’d give him a little bit during the interview to make sure he’s locked in,” Moore said.

Leach’s Air Raid offense continued putting up big numbers against Lousiana Tech with quarterback Will Rogers, who completed 39 of 47 passes for 370 yards and three TDs. Big plays certainly helped, with the Bulldogs completing 15 passes of at least 10 yards with five for at least 20. They continue to be dangerous after the catch, totaling 228 yards against Tech.

Doeren was pleased with how his secondary played the ball in the air against USF. The Wolfpack sure will be tested against the Bulldogs’ pass-heavy Air Raid offense. “In the DB corps, we just know that the game is on us,” safety Cyrus Fagan said.

Mississippi State has room for defensive improvement after yielding 369 yards to Louisiana Tech. The Bulldogs rank 12th of 14 SEC teams in yardage allowed and next to last in points. On the plus side, their first two touchdowns came off turnovers and they made the necessary fourth-quarter stops to set up the historic rally.

Knight and Person give the Wolfpack a strong 1-2 punch on the ground. Both cracked 100 yards in the opener — Knight had 163, Person 105 — while Person had three touchdowns by halftime against USF. North Carolina State will need that type of balance to ease pressure on Leary as well as the defense by keeping MSU’s offense on the sideline.