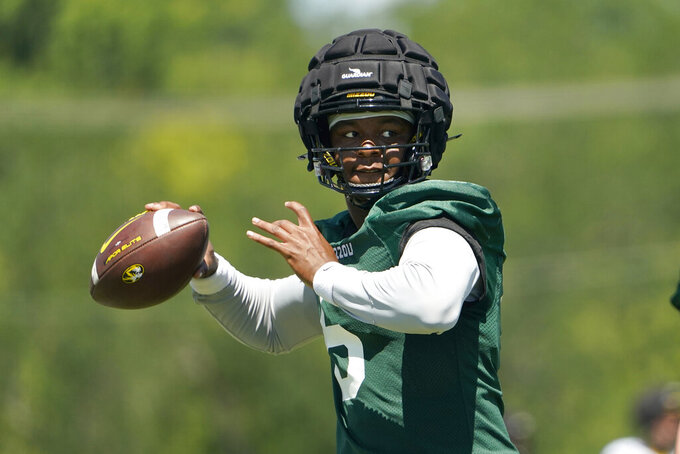 Line: Missouri by 19 1/2, according to FanDuel Sportsbook

Missouri needs to get off to a fast start with a high-profile showdown at former Big 12 rival Kansas State awaiting the Tigers in Week 2. It's an important season for coach Eli Drinkwitz, who has yet to break through despite stellar recruiting classes since his arrival in Columbia. He retooled both sides of the ball with a slew of Division I transfers, and hopes are high that all the pieces come together quickly. Louisiana Tech is trying to rebuild after a 3-9 season that led to the departure of Skip Holtz and the hiring of Sonny Cumbie, the once-prolific passer who last season served as the interim coach of Texas Tech.

Missouri is breaking in its fifth starting quarterback in five years in Brady Cook, though he will have plenty of talent around him. That includes freshman Luther Burden III, whom many recruiting outlets pegged as the No. 1 wide receiver prospect in the country last season. They'll be going against a Louisiana Tech pass defense that was quietly among the best in Conference USA last season. The leader in the Bulldogs secondary is safety BeeJay Williamson.

Louisiana Tech: QB Matthew Downing won the starting job in fall camp. The well-traveled junior began his career at Georgia, and then transferred to TCU, where he helped to run Cumbie's offense in 2020. Downing will be helped by preseason All-Conference USA WR Smoke Harris, who led the Bulldogs with 71 catches for 756 yards and six TDs last season.

Missouri: RB Tyler Badie was the workhorse a year ago and it could take a trio to replace him. Elijah Young has experience in the system but will be pushed by a couple of transfers. Cody Schrader led Division II with 2,074 yards rushing for Truman State last season while Nathaniel Peat led Stanford with 404 yards and three touchdowns.

Louisiana Tech is opening on the road for the fifth straight season. ... Cumbie went 2-3 as interim coach of Texas Tech last season, including a 34-7 win over Mississippi State in the Liberty Bowl. ... Louisiana Tech added 24 transfers, 11 on offense and 13 on defense. ... Bulldogs LB Tyler Grubbs had 99 tackles as a freshman and 94 as a redshirt freshman, earning all-conference honors both seasons. ... Louisiana Tech has not defeated an SEC opponent since a 27-7 victory over Ole Miss in 2011. ... Harris has caught a pass in 14 consecutive games while leading the Bulldogs in receptions in the last 12. ... Downing is the fourth different starting QB in the last four years for Louisiana Tech. ... Missouri has 50 new players from last season with 31 freshmen and 19 transfers. That includes 14 arrivals from Division I schools. ... Cook earned the starting QB job for Missouri after playing in five games last season. He threw for 238 yards and a touchdown in the Armed Forces Bowl against Army. ... Preseason All-American K Harrison Mevis was 23 of 25 on field goals last season, setting a school record for best percentage. ... Missouri allowed 229.3 yards per game on the ground last season, better than only six Division I schools.