No. 1 Clemson aims to keep rolling in trip to North Carolina 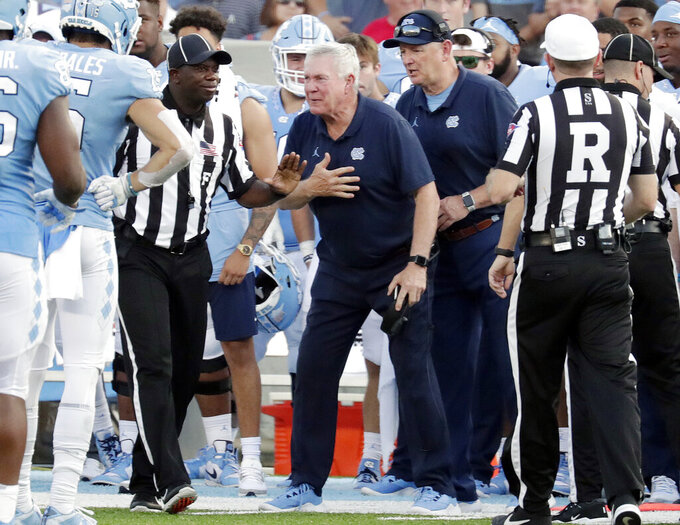 CHAPEL HILL, N.C. (AP) — North Carolina hasn't had many chances like the one it will have Saturday.

That's when reigning national champion Clemson visits Chapel Hill, marking a rare appearance for a top-ranked team in Kenan Stadium. And the heavy-underdog Tar Heels will try to earn their first win against a team carrying the No. 1 national ranking in The Associated Press poll as they dive into the meat of their Atlantic Coast Conference schedule.

The Tar Heels (2-2, 1-0 ACC) haven't hosted a No. 1-ranked team since losing to Florida State in 1993 and 1999, with the Seminoles going on to win the national championship each time. UNC has never beaten a team ranked higher than fourth and has lost all nine meetings with top-ranked teams in the AP poll.

"It's not every day you get to face the No. 1 team in the country," UNC linebacker Jeremiah Gemmel said.

As for Clemson (4-0, 2-0 ACC), Dabo Swinney's Tigers have won the past four league championships to go with a pair of national championships in the past three seasons. They've soundly beaten their first four opponents, running out to fast starts even with star quarterback Trevor Lawrence having thrown more interceptions (five) than he did after taking over the starting job last season (four).

The "closest" game was a 24-10 win against a ranked Texas A&M team, with the Aggies failing to reach the end zone until there were 6 seconds left in a game long decided. And Clemson opened as a 27½-point favorite against the Tar Heels.

Some other things to know about Saturday's Clemson-UNC game:

Clemson is making its first trip to Chapel Hill since 2010, a long gap created by the 14-team league's scheduling rotation when it comes to cross-division matchups. It's only the fourth time that the two ACC charter members from neighboring states have met in Chapel Hill, the other times coming in 2000 and 2002.

UNC visited Clemson in 2014 and the teams met in the ACC championship game in 2015, with the Tigers carrying the No. 1 ranking in that one, too.

UNC started with wins against South Carolina and Miami, but have had their share of mistakes in the past two losses against Wake Forest and Appalachian State.

They've been outscored 41-13 in the second quarter of games, while true freshman Sam Howell threw his first two interceptions in last weekend's loss to the Mountaineers. But the Tar Heels have been strong in the final quarter, outscoring opponents 45-9 to turn every game into a final-play finish so far.

Wallace compares Clemson defensive coordinator Brent Venables to a mad scientist holed up in a secret lab concocting ways for his defenders to make more plays than ever.

Clemson is going for a 20th consecutive win dating to the start of last season, which would extend a program-record run that is second-longest in ACC history. The Tigers are also trying to win their 14th straight ACC regular-season game since losing at Syracuse in October 2017.

Lawrence didn't mind taking his helmet off for good with just 4 seconds gone in the second quarter of the Tigers' 52-10 victory against Charlotte last week. He completed 7 of 9 passes with a pair of touchdowns before cheering on the Tigers' backups.

The Tigers have been able to keep their top players fresh and play a lot of guys with the lopsided scores, too. And that depth will be another big advantage Saturday.

"It's awesome to see guys who've worked hard get an opportunity," he said. "I love seeing my friends and teammates get out there and do well."