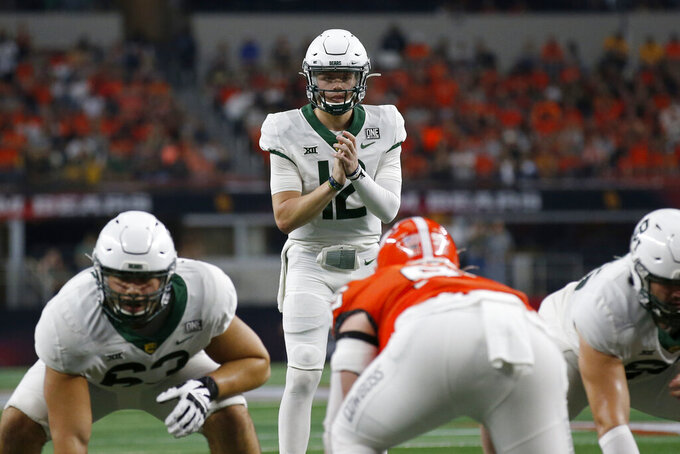 FILE - Baylor quarterback Blake Shapen (12) waits for the snap during the first half of the Big 12 Championship NCAA college football game against Oklahoma State in Arlington, Texas, Saturday, Dec. 4, 2021. Baylor is set to kick off its season on Sept. 3, 2022, against Albany. (AP Photo/Roger Steinman, File)

WACO, Texas (AP) — Baylor settled on its top quarterback in the spring, giving sophomore Blake Shapen time to adjust to his new role and letting the 10th-ranked Bears prepare for this season knowing their starter.

“I’m not the backup quarterback anymore, so I’ve got to take full control of everything that’s going on on the field,” Shapen said. “I think I learned a lot of things being the backup. Stepping up into a leadership role is key for me right now.”

The quarterback competition last year went into fall camp before Gerry Bohanon was named the starter over Shapen and Jacob Zeno (now at UAB) only two weeks before the first game. Shapen beat out the incumbent junior in spring practice this time.

“He’s a slinger,” said junior receiver Gavin Holmes, who is back after missing last season with a knee injury. “Blake’s a stud. He’s got an arm, accurate quarterback, but we put in the work together to get that timing right.”

Shapen was 62-of-86 passing (72.1%) for 596 yards with five touchdowns and no interceptions in limited action last season, but that included being the Big 12 championship game MVP in one of his two starts when Bohanon had a late-season hamstring injury. Bohanon was back for the Sugar Bowl victory that capped Baylor’s record 12-win season after Shapen hurt his shoulder.

Coach Dave Aranda said it was apparent in the spring that Shapen was the better passer and should be the starter. But it was still difficult personally for the coach who has photos at home of his kids posing with Bohanon.

“There is no me without Gerry, there is no last year without Gerry,” Aranda said. “Wanting the best for him, I think it was the fair thing to do, was to make that move early.”

That gave Bohanon just enough time to get into the transfer portal. He went to South Florida, and is now the No. 1 QB for the Bulls.

“I have a lot of respect for (Aranda), and him doing that for me and Gerry," Shapen said. "That means a lot to both of us. ... The opportunity to move on and do what we need to do in the future.”

Plenty of people were surprised by Baylor’s 10-win improvement and Big 12 title, which came a year after Aranda’s 2-7 debut in the pandemic-altered 2020 season. Not the players.

“Once you’ve put in that work, you put in the work all summer ... you know what you have, you know the foundation you set,” fifth-year cornerback Mark Milton said.

There will no sneaking up on anyone this year. Along with their top-10 ranking, the Bears are the preseason Big 12 favorite for the first time.

“Coach has reiterated that we’re going to have a target on our back,” Holmes said. “We’ve got to go out there with something to prove still.”

The Bears are solid up front with plenty of experience on both sides of the line.

All-Big 12 left tackle Connor Galvin, a fifth-year senior who has started 36 games at Baylor, was tabbed as the Big 12’s top offensive lineman last year. There are also three sixth-year seniors, Grant Miller and a pair of graduate transfers going into their second season starting for the Bears, Jacob Gall (Buffalo) and Grant Miller (Vanderbilt).

The defensive front is anchored by 6-foot-4, 358-pound All-Big 12 defensive tackle Siaki Ika. Baylor also added hometown transfer Jaxon Player, a senior from Waco who had nine sacks and 23 ½ tackles for loss over the past two seasons at Tulsa.

Baylor opens the season at home against FCS team Albany, then has a loaded road schedule. The Bears play at future Big 12 team No. 25 BYU in Week 2, and have five of their nine conference games away from home. That includes November games at No. 9 Oklahoma and Texas.