No. 10 UCLA aiming to avoid slip-up against Arizona State 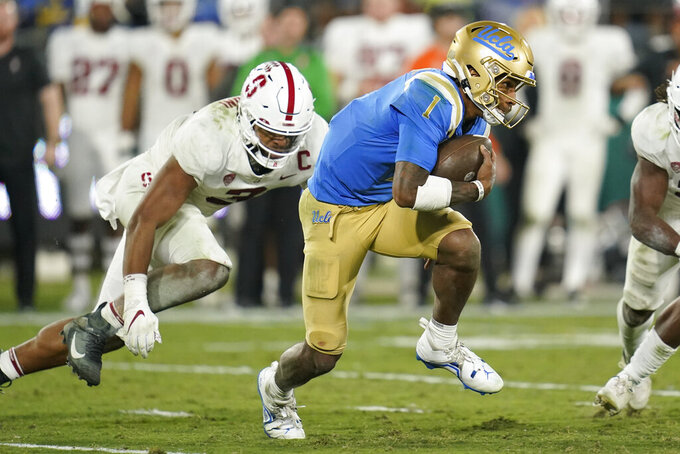 Line: UCLA by 10 1/2, according to FanDuel Sportsbook.

UCLA is looking to remain in the race for the Pac-12 championship and keep its longshot chances at the College Football Playoff alive. The Bruins are a game behind No. 8 Oregon and a half-game behind rival Southern California for the top two spots in the Pac-12. UCLA is coming off a 38-13 win against Stanford. Arizona State won its second game under interim coach Shaun Aguano last week, beating Colorado 42-34.

Arizona State's defense vs. UCLA quarterback Dorian Thompson-Robinson. DTR is fifth nationally with a 72.3% completion rate and is 10th with a passing efficiency of 165.7. More than that, Thompson-Robinson is a threat to take off running on any given play, so the Sun Devils will have their hands full trying to keep track of him. Arizona State is ninth in the Pac-12 in scoring defense, allowing 28.8 points per game.

UCLA: RB Zach Charbonnet. He leads the Pac-12 with 137.7 yards rushing per game and has run for at least one touchdown in nine straight Pac-12 games. He had 259 all-purpose yards against Stanford, including a career-high 198 rushing.

Arizona State: QB Trenton Bourguet. Aguano said there would be an open competition at quarterback after Emory Jones' uneven performance in a loss to Stanford. Bourguet was the choice and was superb, throwing for 435 yards and three touchdowns to set a record for most yards in a first career start.

UCLA has its highest ranking for a November game since playing Stanford at No. 9 in 2014. ... Jaylin Conyers became the first Arizona State tight end to have three touchdown catches in a three game against Colorado last week. ... Thompson-Robinson will tie Cade McNown for most starts in UCLA history with his 44th. ... Arizona RB Xazavian Halladay eclipsed 4,000 career yards rushing after running for 118 yards and three touchdowns against the Buffaloes.