No. 11 Miami, NC State face off for ACC positioning 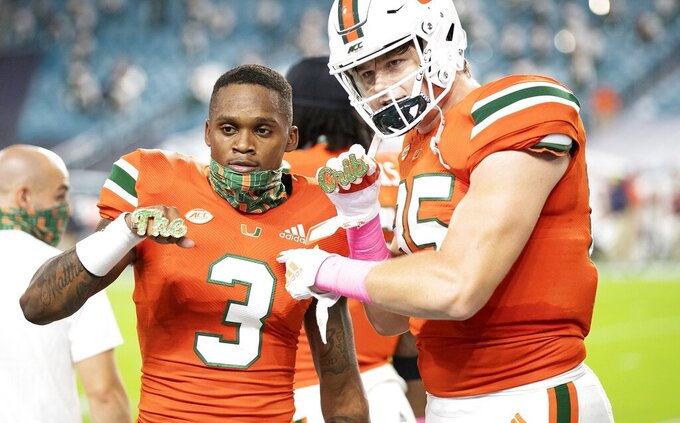 For Miami, a win would keep it one game in the loss column back in the ACC standings of Clemson or Notre Dame — depending on which team wins that showdown of unbeaten top-five teams this weekend — and no worse than in sole possession of third place. N.C. State could get as high as third in the ACC with a win, though a loss would leave the Wolfpack mired somewhere between fifth and eighth.

Miami’s running game vs. N.C. State’s defensive front. It’s been very simple for the Wolfpack; when they’re good against the run this season, they win and when not, they’ve gotten routed. Virginia Tech and North Carolina averaged 320 yards on the ground in their wins over N.C. State. Teams that have lost to the Wolfpack this season averaged 113 yards rushing. Miami has managed only 2.8 yards per carry in its last three games after averaging 5.9 in its first three games.

Miami: WR Mike Harley is coming off the best game of his four-year career, with 10 catches for 170 yards in the Hurricanes’ win over Virginia two weeks ago.

N.C. State: RT Justin Witt is back in the lineup after an injury, and he’ll be needed against a Miami defensive line that has gotten into backfields with ease this season.

This is the first meeting between the schools since 2016. Only two players who are expected to play Friday also appeared in that 2016 game; Miami linebacker Zach McCloud started at that same position, and N.C. State offensive lineman Tyrone Riley played eight snaps in that game at defensive end. ... Miami coach Manny Diaz is a former Wolfpack assistant. ... Heisman Trophy winner Andre Ware is part of the broadcast crew for the game; he played quarterback at Houston, and current Miami QB D’Eriq King started his college career there. ... The teams are remarkably close in some stats. Both have exactly 130 first downs, both are averaging exactly 19.57 yards per kickoff return, Miami averages 1.3 more points per game (32.8-31.5) and N.C. State has committed 49 penalties to Miami’s 48.