No. 12 Georgia vs Mizzou has different look from month ago 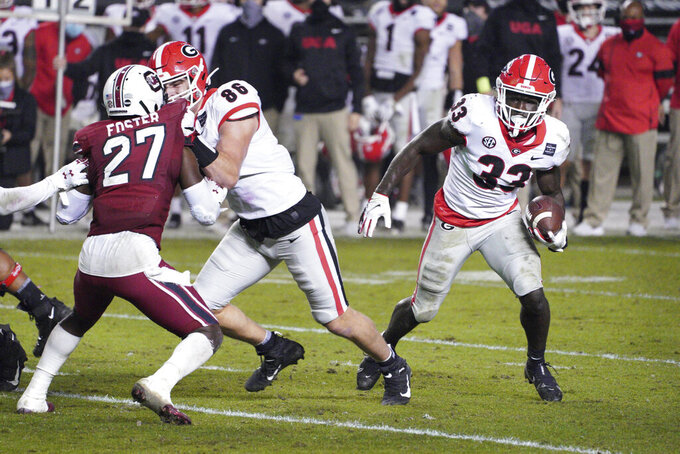 Georgia running back Daijun Edwards (33) carries the ball behind a block from John FitzPatrick (86) against South Carolina defensive back Jaylan Foster (27) during the second half of an NCAA college football game Saturday, Nov. 28, 2020, in Columbia, S.C. (AP Photo/Sean Rayford)

The game between No. 12 Georgia and Missouri that will take place Saturday at Faurot Field probably won't look a whole lot like the one the Bulldogs and Tigers would have played if they met a few weeks ago.

Georgia was still trying to settle on a quarterback, listing four possibilities at the position, before the matchup set for Nov. 14 was postponed because of COVID-19 issues within the Tigers program. Missouri was still trying to get on track after a lopsided loss at Florida left coach Eli Drinkwitz's team 2-3 in his first season.

Nearly a month later, J.T. Daniels is entrenched under center for the Bulldogs, while the Tigers have ripped off three straight wins, capped by a dramatic comeback victory over Arkansas last weekend.

“Any time you have a new quarterback who's got game experience under him, there's going to be a challenge to figuring out how to stop him,” Drinkwitz said. “One of the benefits of film is that you get to see other people try things and figure out, ‘OK, that gives him problems. That doesn’t give him problems. This fits into our scheme.' And there's just not a lot of tape on J.T. We know he's a tremendous talent at quarterback, so we'll have to hunt and peck and make adjustments.”

Daniels put together some solid performances at Southern California before tearing his ACL and transferring to Georgia (6-2, all SEC), where he continued to rehab early this season. And when he was cleared to play against Mississippi State, he promptly threw for 401 yards and three touchdowns.

He won't be the only hot-handed quarterback on the field Saturday, though.

One of the biggest reasons Missouri (5-3) has been on a tear is Connor Bazelak, the redshirt freshman who has been playing beyond his years. He threw for 380 yards against the Razorbacks and calmly led the Tigers downfield in the closing seconds to set up Harrison Mevis' winning field goal as time expired.

“I'm extremely impressed with the guy's composure, poise, and he's going to be there for a while,” Georgia coach Kirby Smart said. “He knows coverages — as soon as he sees a coverage, he knows where to go with the ball. He throws a really good deep ball. When you play contested, pressed man all over the field, he makes the throws and they make 50-50 catches. When you play zone and you spot-drop all over, he knows where to go with the ball and he completes it.”

Smart was equally impressed by Drinkwitz, the front-runner for SEC coach of the year.

“If you’re not in the perfect call then they can get you here or they can get you there,” he said. "He’s going to be great for our league because when you look at what he does, there are going to be people copycatting what he does to add that to their offense because his history at App State was that, his story at NC State was that. He was really good at creating offense.”

The Bulldogs also have had some time to adjust to new offensive coordinator Jeff Monken, and it has shown in the way their offense has hammered Mississippi State and South Carolina the past couple of weeks.

“He's really added some explosiveness to it,” Drinkwitz said.

Georgia punter Jake Camarda was announced as a finalist for the Ray Guy Award, kicker Jack Podlesny for the Lou Groza Award and linebacker Azeez Ojulari for the Bednarik Award. They joined linebackers Monty Rice and Nakobe Dean, who had already been announced as semifinalists for the Butkus Award.

The Tigers' Nick Bolton is also a Bednarik semifinalist, and Mevis is on the short list for the Groza.

The forecast for Saturday calls for temperatures in the 30s and a mixture of rain and sleet.

“Playing in cold weather doesn't bother me at all. I feel like it's a mindset,” said Dean, the Georgia linebacker. “My senior year of high school, we went to the playoffs, so we played in cold weather. Three of my last four games, we played in 36-degree weather with rain.”

Bulldogs center Trey Hill is out with a meniscus injury, leaving Warren Ericson and Sedrick Van Pran competing for the starting job. Safety Richard LeCounte (concussion and ribs) is unlikely to play despite getting some reps in practice this week, though running back Kendall Milton (knee) and nose tackle Jordan Davis (elbow) should be available.

Missouri defensive end Tre Williams is no longer with the team, Drinkwitz said, after he was honored as part of the team's senior day festivities last weekend.

“Tre came in and had a conversation about the future, about his future with Mizzou football, and as of right now, he’s exploring opportunities outside of Mizzou football,” Drinkwitz said. "We wish him the absolute best in whatever he decides to do with his future.”