No. 12 Kentucky seeks rebound off bye at Mississippi State 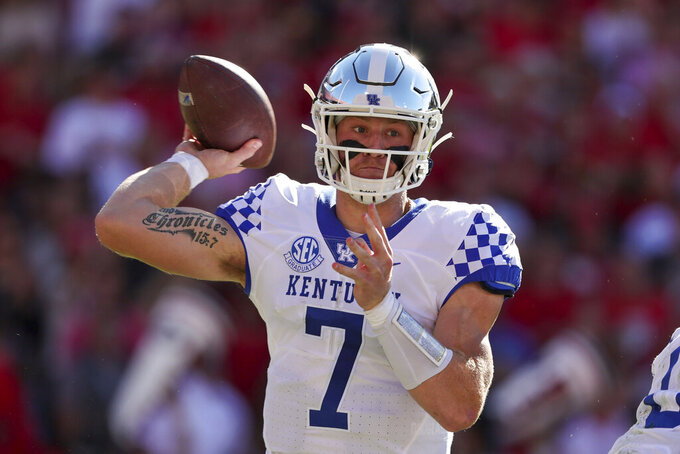 Kentucky quarterback Will Levis (7) throws a pass against Georgia during the first half of an NCAA college football game Saturday, Oct. 16, 2021 in Athens, Ga. (AP Photo/Butch Dill)

Kentucky coach Mark Stoops wanted the No. 12 Wildcats to keep their edge during the week off and they’ll need against high-flying Mississippi State.

The Wildcats will need to be at their best in all phases if they hope to end a long drought at Mississippi State.

Kentucky (6-1, 4-1 Southeastern Conference) needed a recharge after falling 30-13 at top-ranked Georgia nearly two weeks ago. After a successful but grueling first half highlighted by SEC wins over Florida and LSU, the Wildcats now seek to rebound Saturday night notch their first win in Starkville, Mississippi, since 2008.

“We continue to worry about ourselves and continue to try to elevate our game and play at a higher level,” Stoops said this week.

The Wildcats began 6-0 for the first time since 1950 before a rude awakening physically against Georgia. Stoops used the bye to reinforce what worked up to that point and reclaim good habits.

“There really wasn’t a challenge, which was a good thing for our team,” Stoops added about the focus. “We definitely talked about it and wanted them to understand that we were not going to let (a letdown) happen. We’re not going to take our foot off the gas.”

The Bulldogs regrouped from a 49-9 beatdown by then-No. 5 Alabama by trouncing last-place Vanderbilt 45-6 last week in Nashville. Their pass-happy Air Raid scheme reclaimed its offensive groove by totaling 461 yards through the air alone while surpassing 500 yards for the second time under second-year coach Mike Leach.

SEC passing leader Will Rogers completed 41 of 57 passes for 384 yards and four touchdowns in the rout. The sophomore also maintained his remarkable 70% completion rate and continued to demonstrate how far he has come since Kentucky intercepted him twice among six pickoffs in last year’s 24-2 loss in Lexington.

Then again, Leach expects Kentucky to be different as well, especially with an extra week to prepare.

“This is a really solid team,” the coach said. “They’re going to play hard. They’ve had some close ones that they’ve gotten out of. That’s the biggest thing. They are guys that play hard and play together.”

Some other things to watch as No. 12 Kentucky visits Mississippi State:

MSU quarterback Will Rogers has thrown for 2,546 yards and 18 touchdowns against seven interceptions. Last week showed how many options the Air Raid offense has as five receivers each caught five passes while 13 had at least one reception from either Rogers and backup QB Chance Lovertich. That group of five included SEC receiving leader Makai Polk (8.3 receptions per game, 552 yards).

“It is important that we have good distribution,” Leach said. “We had good distribution where you want all the skilled positions to contribute to the offensive effort. That was good to see.”

Kentucky running back Chris Rodriguez Jr. managed just seven rushes for seven yards at Georgia but remains atop the SEC with 775 yards. Kentucky averages nearly 191 yards per ground and Stoops believes Rodriguez and the other runners will bounce back.

“Anytime we don’t, as a team or individually, play the way we want to you’ve got to go back to work and try to get better and figure it out,” Stoops said. “Chris is a big boy and he’ll handle it the right way.”

Rodriguez has run for 22 TDs and is three away from tying for fourth in school history.

The game features the SEC’s Nos. 3 and 4 defenses, with Kentucky allowing six fewer yards per game (320.8) than MSU. The order is reversed with run defense, with the Bulldogs allowing just 92.7 yards on the ground. They held Vanderbilt to just nine yards rushing on 17 attempts and 155 overall.

As the teams prepare to play on the eve of Halloween, Leach’s lengthy comments about his candy likes and dislikes — including a funny take on candy corn — have gone viral and led to as many questions about them as football. Stoops wouldn’t bite on queries about his favorite Halloween candy but joked, “You can tell by me, I mean, I eat any candy.”

Recent series history favors the host Bulldogs as they aim to break a 24-all deadlock with Kentucky. The home team has won the past four meetings and 29 of 48 matchups. MSU is 14-7 in Starkville against Kentucky.