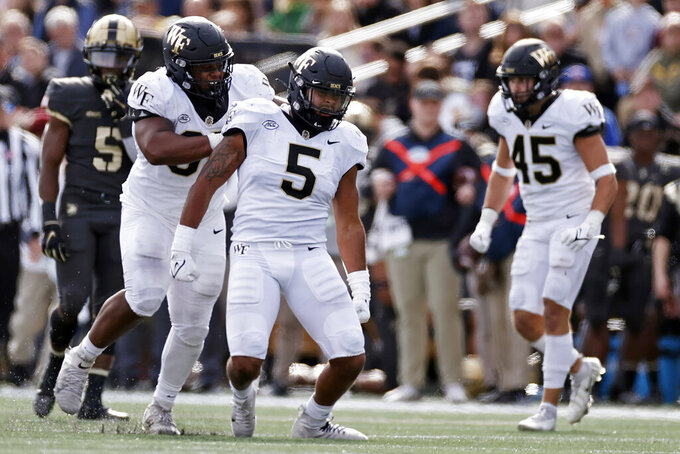 WINSTON-SALEM, N.C. (AP) — The offense is moving the ball with big plays and efficient drives. The goal now for Wake Forest coach Dave Clawson is to clean up recurring defensive mistakes for a team chasing an Atlantic Coast Conference division title.

The 13th-ranked Demon Deacons have struggled in October with containing the run along with Clawson pointing to smaller details as simple as taking the right tackling angle or shedding a block more quickly. They enter Saturday’s game against Duke still unbeaten but knowing they must improve heading into a difficult close to the schedule, and the first challenge is slowing one of the nation’s leading rushers in Mataeo Durant.

“We certainly have not played good rush defense the last few weeks,” Clawson said. “So that’s something we’re going to have to tighten down or it’s going to be a long day.”

The goal for Wake Forest (7-0, 4-0 ACC) was to be a more balanced group with its improved depth instead of having to rely so heavily on a fast-paced offense to win games as in past years. That had worked for the first month of the season, both against a pair of overmatched nonconference opponents and their first two league games against Florida State and Virginia.

But the defense has had a tougher time of late, even as Wake Forest tied the 1944 team for the program’s best start.

Wake Forest has surrendered 42.3 points and 543.7 yards per game in wins against Louisville, Syracuse and last weekend against Army. The Demon Deacons allowed an average of 5.7 yards per rush in those games, highlighted by Army’s option-based running attack amassing 416 yards in last weekend's 70-56 shootout win.

Compare that to the FSU and Virginia wins, when they allowed a total of 31 points and 190 yards rushing while surrendering an average of 411.5 yards – including 3.4 yards per rush. Those performances look even better now, especially the 37-17 road win against a Virginia team that has scored at least 30 points in every other game as one of the nation’s top offenses behind quarterback Brennan Armstrong.

It hasn't helped that Wake Forest has been banged up at key positions, such as defensive back Nasir Greer playing just two games. But Clawson isn’t focused on yardage, emphasizing scoring defense and stop rates while noting his team’s offensive pace (averaging 86.1 plays) contributes to more chances for opponents, too.

“Now that doesn’t explain last week, right?” Clawson said. “But I would argue, you look at what Virginia is offensively this year: has anyone defended them any better than us?”

The next challenge is slowing the Blue Devils’ Durant, ranked fourth in the Bowl Subdivision by averaging 124.3 yards rushing. The schedule only gets tougher for November as league games against North Carolina State, Clemson and Boston College determine whether the Demon Deacons stay atop the Atlantic Division.

“We had a really, really bad day against the option,” Clawson said. “And it’s a little problematic because two weeks before that we struggled defending Syracuse on the ground. So I’m not ignoring the problem, but I still think that we have the makings of a good defense.”