No. 14 NC State hosts FSU looking to get more out of offense 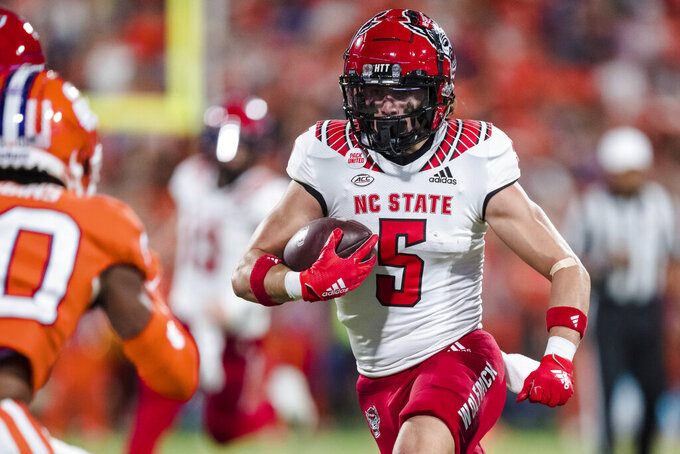 RALEIGH, N.C. (AP) — North Carolina State's offense has yet to find a consistently strong form. That has to change, starting Saturday night against Florida State.

The 14th-ranked Wolfpack (4-1, 0-1 ACC) lost last weekend at No. 5 Clemson in a key matchup for the league's Atlantic Division race. Offensive issues stood out, starting with an ineffective running game along with the inability to attack downfield.

N.C. State is ninth in the 14-team ACC in scoring (32.8) and 10th in total offense (384.6) despite the presence of the preseason league player of the year in quarterback Devin Leary. It needs more, particularly with the Seminoles (4-1, 2-1) arriving with their only loss coming last week to No. 15 Wake Forest.

Receiver play stands out, though coach Dave Doeren pointed to more than that.

“We win a lot of 50/50 balls here, we have for a while,” he said. “We need to get back to that. And it’s not just on the receivers or the tight ends or the backs. It’s the entire offense: give the quarterback a chance to make that throw and then go up and finish the play. I think that’s the thing we can improve on.

“We’re catching the ball underneath. ... Guys are blocking better than they have in the past. It’s just being more explosive and connecting with them so they have the chance to be more explosive.”

This isn't a one-time issue for N.C. State. The Wolfpack sputtered through the second half of the opener at East Carolina and barely avoided a stunning upset.

The team lost top target Emeka Emezie from last year and has Thayer Thomas as a reliable midrange threat. Other receivers like Devin Carter offer flashes on the outside. But those plays aren't coming regularly enough and only Thomas (301 yards) has cracked 200 yards receiving through five games.

Offensive coordinator Tim Beck said Clemson adjusted to offer more help for their cornerbacks, and that he has to be patient as a playcaller when defenses play deeper.

“I'm used to throwing the ball down the field, chunk plays and 50/50 balls,” Beck said. ‘They’re not giving us as many, they're really not."

The Seminoles have their own challenge of rebounding from their first loss, which knocked them from a No. 23 ranking in the AP Top 25. The Wake Forest loss came after the program's first 4-0 start since the 2015 season under Jimbo Fisher.

“We know that we've got to go play our best game,” Seminoles coach Mike Norvell said. “That's all I want to see our team do, is go out there and get better.”

Florida State quarterback Jordan Travis isn't having the same troubles finding downfield success as Leary. The fifth-year passer, who started his career at Louisville, leads the league and is tied for eighth in the Bowl Subdivision ranks by averaging 9.7 yards per pass attempt. His 14.77 yards per completion is an ACC high and 10th in FBS.

Johnny Wilson is already a tough 1-on-1 matchup.

The Florida State receiver with a 6-foot-7, 235-pound frame has 19 receptions for 357 yards and three touchdowns. That surpasses his combined totals in all three categories from his first two college seasons at Arizona State (2020 and ’21).

He leads the Seminoles in all three categories and is second in the ACC with 18.79 yards per reception.

FSU starting left tackle Robert Scott missed two games following an injury in the fourth quarter at Louisville. Scott has practiced the last two days, and Norvell said he is optimistic Scott will play on Saturday.

Norvell said he expects defensive end Jared Verse will be ready after being limited to 24 snaps against Wake Forest. In addition, reserve linebacker Amari Gainer looks likely to see some limited work Saturday. He hasn't played since the opener.