No. 16 SMU heads to Houston highest-ranked in Group of Five 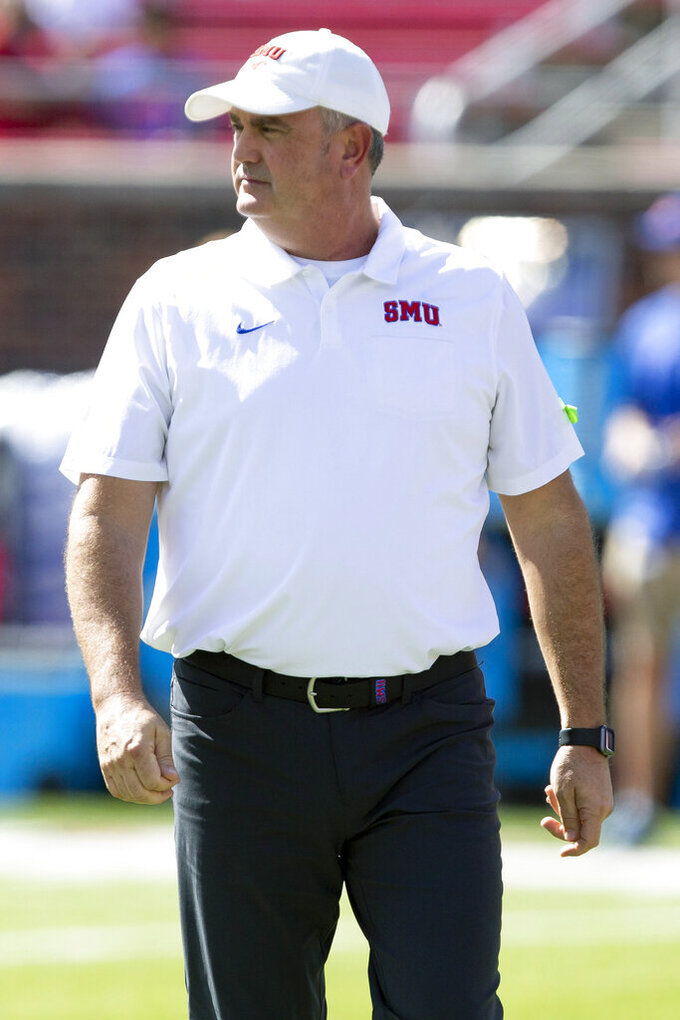 HOUSTON (AP) — Sonny Dykes knows No. 16 SMU just needs to keep winning games. He is not really concerned right now about the Mustangs being the highest-ranked Group of Five team and what that could eventually mean if they stay that way.

"I don't know that we understand any of that right now," Dykes said. "I think the thing with us ... we talked about this at length with our guys. Everybody will kick us to the curb pretty fast."

SMU (7-0, 3-0 American Athletic), off to its best start since the Pony Express days in 1982 before the NCAA death penalty, plays at Houston (3-4, 1-2) on Thursday night in a matchup of coaches who have known each other for a long time.

After that, the Mustangs then go to Memphis on Nov. 2, which will be their last game before the first College Football Playoff rankings come out. Those rankings determine who plays for the national championship, and also sets the matchups for the New Year's Six games — the highest-ranked team outside the Power Five conferences will play in the Cotton Bowl this season.

"There's a higher standard that what we have to play to, and when you're not in a Power Five conference, that's part of it. We understand that," Dykes said. "We're in a daily fight for respect, and at the same time we've got to deserve it, and we have to play at a really high level. We know that."

With former Texas quarterback Shane Buechele, the Mustangs have scored at least 41 points in their last games. He is coming off a career-high 457 yards passing with six touchdowns in a win over Temple.

Houston is 2-1 since standout dual-threat quarterback D'Eriq King and receiver Keith Corbin decided after the fourth game that they were redshirting the remainder of this season to save a year of eligibility.

Cougars quarterback Clayton Tune has been dealing with a pulled hamstring for almost a month and could be ready to play on the short week after not playing in a win at UConn when freshman Logan Holgorsen, the son of coach Dana Holgorsen, was the starter.

Tune got hurt Sept. 28 against North Texas in his first start and was still limited against No. 18 Cincinnati despite an open date before that game.

"I feel good about it. I think everybody that understands that he came back after having a bye week. He had time to be able to recover. Then he played against Cincinnati," Dana Holgorsen said. "A week later, we probably could've played him, but it was going to be a recurring thing every single week."

ON THE SAME STAFF

Holgorsen is in his first year as Houston's head coach after eight seasons at West Virginia, while former California and Louisiana Tech coach Dykes is in his second season at SMU. The two were on Texas Tech's staff together for head coach Mike Leach from 2000-06, a stretch when the Red Raiders won 56 games and went to a bowl game each of those seven seasons.

Houston running back Kyle Porter and Buechele spent three seasons together at Texas and are have having success with their new teams. Buechele has thrown for 2,122 yards and 18 touchdowns this season. Porter is Houston's leading rusher with 448 yards and has scored three touchdowns.

"He went to Texas and played early, you could tell he was one of those guys who had been in the system like we all tried to run," Holgorsen said of Buechele. "I knew as soon as it was announced that he was going to SMU that it could be the difference in SMU's season. He is playing really well, he is accurate and he understands the game."

RANKED ON THE ROAD

Houston will be looking to return the favor to a ranked Mustangs team playing on the road. The last two times the Cougars played at SMU, they were ranked and lost — 45-31 last year, after a 38-16 setback in 2016 that knocked then-No. 11 Houston all the way out of the poll.

The Mustangs will wear their Dallas-themed jerseys for the nationally televised game, a nod to the city and those who suffered losses after storms ripped through the Dallas area Sunday night. Dallas Mayor Eric Johnson reached out to SMU President R. Gerald Turner about the possibility. The "Dallas" script across the front of the jersey pays homage to SMU alum and AFL founder Lamar Hunt and the Dallas Texans.