No. 17 Baylor opens Big 12 title defense on road vs Cyclones 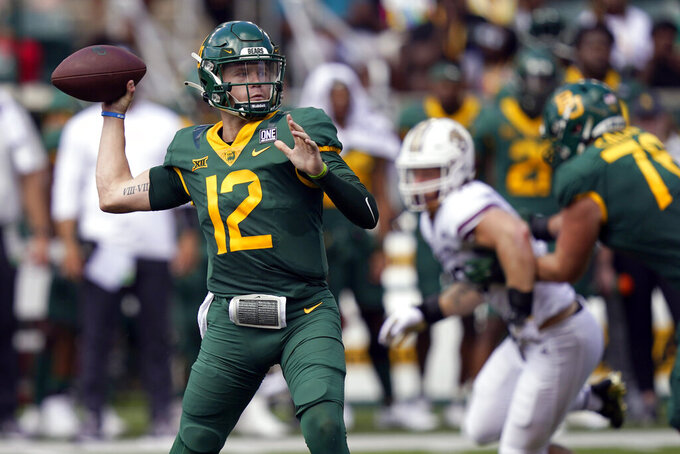 Line: Iowa State by 2 1/2, according to FanDuel Sportsbook.

Defending Big 12 champion Baylor is not easing into the conference schedule. The last three meetings were decided by a total of 11 points, and the Bears' most recent win in Ames was in 2016. Iowa State was picked sixth in the Big 12 preseason poll, but the Cyclones believe more is possible following their first 3-0 start since 2012.

Baylor offensive line vs. Iowa State front seven. The Bears brought back four starters on the line that paved the way for the Big 12's top rushing attack last year and was solid in pass protection. But the Bears allowed four sacks and averaged just 2.9 yards per carry against BYU two weeks ago. Iowa State is first in the conference in rushing defense, and the Will McDonald-led pass rush got untracked with four sacks against Ohio last week after managing one in the first two games.

Baylor: RB Richard Reese is one of the top freshman rushers in the nation. He's coming off his best game, having run for 156 yards and three touchdowns against Texas State. He's averaging 79 yards per game and 7 yards per carry.

Iowa State: LB Colby Reeder has an interception in two straight games and joins Kansas State's Daniel Green as the only Big 12 linebackers with two picks. The Delaware transfer also deflected a pass that a teammate intercepted in the opener against Southeast Missouri State.

Baylor won last year’s meeting 31-29 despite the Cyclones holding a 479-282 edge in total offense. ... Iowa State is going for its first 4-0 start since 2000. ... The Cyclones have won 11 straight at home against the Big 12, the league’s longest active streak. ... Iowa State held Iowa and Ohio under 300 totals in back-to-back weeks. ... Cyclones first-year starter Hunter Dekkers' 74.3% completion rate is fifth nationally. ... Baylor RB Taye McWilliams, TE Ben Sims and WR Monaray Baldwin missed last week's win over Texas State with head injuries. As of late Wednesday it was not clear if they will play.