No. 17 Baylor wraps up non-conference slate vs. Texas State 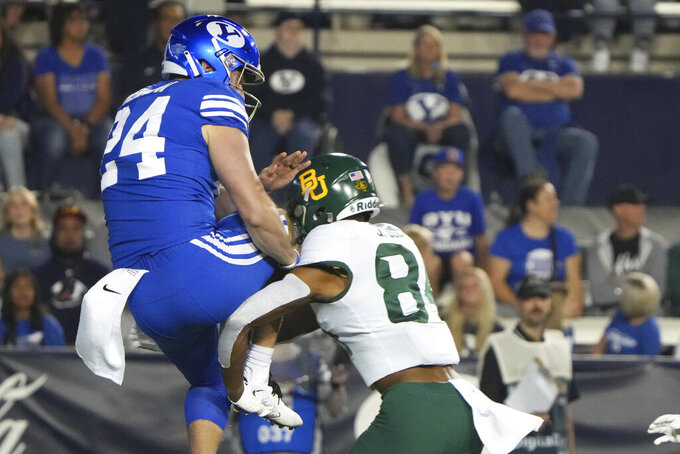 Line: Baylor by 29 1/2, according to FanDuel Sportsbook.

Baylor wraps up its nonconference schedule looking to bounce back from a double-overtime loss at future Big 12 foe BYU. While the Bears have never lost to Texas State, they had to grind out a 29-20 win in the 2021 season opener in the only game in the series played in San Marcos. Since becoming an FBS team in 2012, the Bobcats are 0-9 vs. Top 25 teams and lost those games by an average margin of nearly 34 points.

Bobcats' running back Calvin Hill vs. Baylor's seven-man defensive front. The 5-foot-8, 185-pound Hill, a fourth-year sophomore, is averaging 5.5 yards per carry this season and had a career-high 195 yards last week against FIU. That was the third time in his last four games with at least 100 yards rushing. Baylor is third in the Big 12 allowing 85 yards rushing per game and 2.7 yards per carry.

Baylor: Fifth-year senior tight end Ben Sims has a team-high nine catches. That includes a touchdown catch against BYU that was the 10th of his career, already the school record for a tight end.

Baylor linebacker Dillon Doyle will have to sit out the first half following his ejection for targeting in the second half of the BYU game. ... Texas State's 41-12 win over FIU last week was its largest margin of victory over an FBS opponent since beating New Mexico State 66-28 in 2012. ... The Bears have won their last eight home games. They were 7-0 last year at McLane Stadium, and won 69-10 there over Albany in the season opener two weeks ago. ... Baylor is averaging 11 penalties a game, which is tied with Houston for the most among FBS teams. Texas State has nine penalties a game.