No. 17 Illini out to avoid complacency in trip to Nebraska 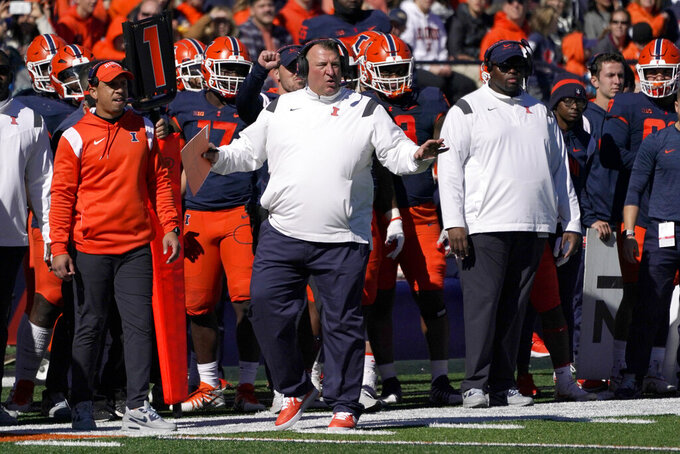 Illinois head coach Bret Bielema gestures on the sidelines during the first half of an NCAA college football game against Minnesota, Saturday, Oct. 15, 2022, in Champaign, Ill. (AP Photo/Charles Rex Arbogast)

That was in 2011, and the next 10 seasons were not kind to the Illini. Their 20 Big Ten wins between 2012-21 were fewest of any team in the conference that entire span.

An upbeat vibe around Champaign is palpable in coach Bret Bielema's second season. The 17th-ranked Illini (6-1, 3-1 Big Ten) are alone in first place in the West Division, they drew their largest home crowd since 2013 for the Oct. 15 win over Minnesota, and the team with the nation's leading rusher and top defense has been bathed in adulation.

Given Illinois' history, this could be a dangerous time for a coach who's trying to build a program that can have sustained rather than fleeting success. While Bielema wants his players to have fun with all that comes with their accomplishments, he also encourages them to keep on keeping on.

“Consistency is a really great thing when you talk about success,” Bielema said, “but it has an evil cousin called complacency that can bring you failure, right? And that's the driving edge right now is to keep complacency out of our business, out of our building, offensively, defensively, special teams and especially the coaching staff as well.”

Next up for Illinois is a Saturday visit to Nebraska (3-4, 2-2) for a meeting of teams coming off open dates.

Nebraska has lost two straight to the Illini and 19 in a row against Top 25 opponents.

“I’m sure they’re feeling good,” Cornhuskers quarterback Casey Thompson said, "but we like what we have as well and are excited about the matchup.”

Illinois probably will pound away with a well-rested Chase Brown, who went over 1,000 yards for the season against Minnesota and is coming off a school-record eight straight 100-yard performances. Nebraska has the Big Ten's worst run defense and has allowed allowed a 100-yard rusher in five of its seven games.

“We will give him the respect that he deserves,” linebacker Eteva Mauga-Clements said, “but a guy like him, he knows what he is doing. He is going to hit hard, and if he knows there is nothing else he can do, he is going to move forward and get as many yards as he can get.”

The yards haven't been easy to come by lately for Nebraska's Anthony Grant. He went over 100 yards in four of the first five games but was limited to a combined 82 yards on 30 carries by Rutgers and Purdue. He has not had a run of 10 yards or more in 54 carries since having 15 in his first 90.

Illinois is allowing 77.9 rushing yards per game and 2.77 yards per carry.

HELP ON THE WAY

Brown has 97 rushing attempts the last three games, including a national season-high 41 against Minnesota two weeks ago, and averages 27.4 per game. Help is on the way.

Josh McCray, who has been out since the Illini's season opener, resumed practicing last week and should be available. Chase Hayden and Reggie Love III, limited by injuries against Minnesota, have carried a total of just 16 times the last three games. McCray was Brown's primary backup last season.

TOUGH IN SECOND HALF

Illinois has allowed only 17 second-half points, including seven in fourth quarters. The Illini are outscoring opponents 77-17 in second halves.

LSU transfer Trey Palmer has been a revelation for the Huskers, who will go against the nation's top pass efficiency defense. Palmer set a school record with his 237 yards on seven catches against Purdue on Oct. 15, and his 111.6 receiving yards per game is fourth nationally.

Bielema's previous two trips to Lincoln were memorable. He was Iowa linebackers coach in 2000 when the Hawkeyes lost a nonconference meeting 42-13 and received some of that well-known Nebraska fan hospitality.

“I remember going over there and getting the cheers running on the field,” he said, “and then they cheered louder when you left because you lost.”

He was Kansas State's co-defensive coordinator in 2003 when the Wildcats won 38-9 for their first victory in Lincoln since 1968.

Nebraska moved from the Big 12 to the Big Ten in 2011. Bielema was the head coach at Wisconsin in September 2012 when the Badgers traveled to Lincoln and were defeated by the Huskers. Bielema left Wisconsin for Arkansas after the 2012 season.