No. 23 NC State focuses on Louisiana Tech after big victory 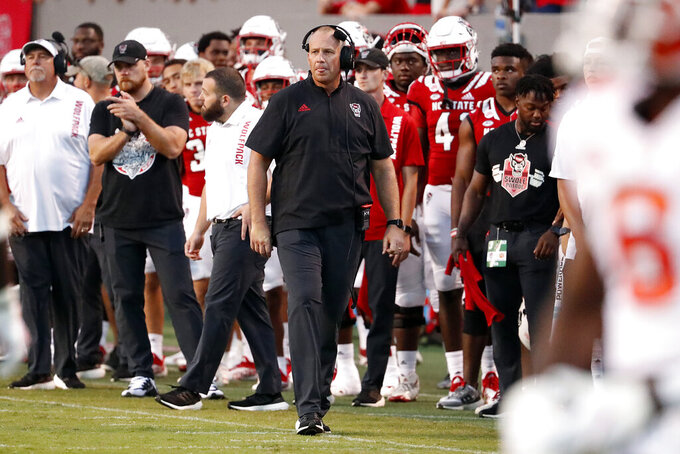 Next up is Saturday’s visit from Louisiana Tech in the Wolfpack’s final nonconference game before diving into the rest of the Atlantic Coast Conference schedule. It comes a week after the Wolfpack earned the program’s first win against six-time reigning ACC champion Clemson since 2011.

“Our goal wasn’t to beat Clemson,” Doeren said. “Our goal was to win every game we play this year, and to be in contention to win this league. So all we’ve done is to move closer to the goal. …. We’ve all seen enough football to know that there’s a lot of teams out there that don’t handle winning very well, and we’re not going to be one of them.”

The double-overtime win against the Tigers pushed the Wolfpack (3-1) into the AP Top 25 as the ACC’s highest-ranked team in a wide-open year, anchored by a defense that ranks among the best in the Bowl Subdivision.

Receiver Emeka Emezie said the Wolfpack did a good job moving on from an early loss at Mississippi State, so it should be ready for this challenge.

“That’s how you can tell we have a mature team, because we bounced back,” Emezie said.

Louisiana Tech (2-2) also lost at Mississippi State this year, blowing a 20-point lead early in the fourth quarter of a 35-34 season-opening loss. Now the Bulldogs from Conference USA will get a second shot at beating a power-conference opponent on the road.

“We want to win these games. There’s not a moral victory just in being close,” Bulldogs coach Skip Holtz said. “But I also think we realize nonconference-wise with the teams we’re playing, we’ve got to be playing at a really high level to do what we want to do and accomplish what we want.”

Some other things to know about Saturday’s Louisiana Tech-N.C. State game:

N.C. State is missing three defensive starters due to season-ending injuries in all-ACC linebacker Payton Wilson, safety Cyrus Fagan and nose tackle C.J. Clark – who was on the sideline on crutches with his left knee in a brace during the Clemson game.

But the Wolfpack held Clemson to 214 total yards. That’s part of a defensive showing this year that has N.C. State sixth in the FBS ranks in scoring defense (13 points per game) and seventh in total defense (249.2 yards).

Holtz said he isn’t sure about whether the Bulldogs will have quarterback Austin Kendall, who missed last week’s win against North Texas with what the school described only as “medical reasons.”

Kendall, who played previously at Oklahoma and West Virginia, threw for 351 yards and four touchdowns in a loss at SMU on Sept. 18. He also ran for a touchdown in each of the first three games.

Sophomore Aaron Allen is listed at No. 2 on the depth chart for the game.

N.C. State would love to get another big game from Emezie and fellow receiver Devin Carter.

Emezie, a senior, had career highs of 14 catches for 116 yards and a touchdown against Clemson. Carter, a redshirt sophomore, had two TD catches in that game – the second being the winning double-OT score on a back-shoulder throw while staying inbounds in the end zone.

The teams have met only once before. Coincidentally, it was the first game for both Doeren and Holtz at their programs.

BULLDOGS VS. THE ACC

Louisiana Tech has lost 10 of 15 matchups with ACC programs, though nearly all of those games were long ago.

The Bulldogs have won two of the last three with ACC teams. They beat Virginia on the road in 2012, then followed the 2013 loss to N.C. State by beating Miami 14-0 in the Independence Bowl to cap a 10-win season in 2019.