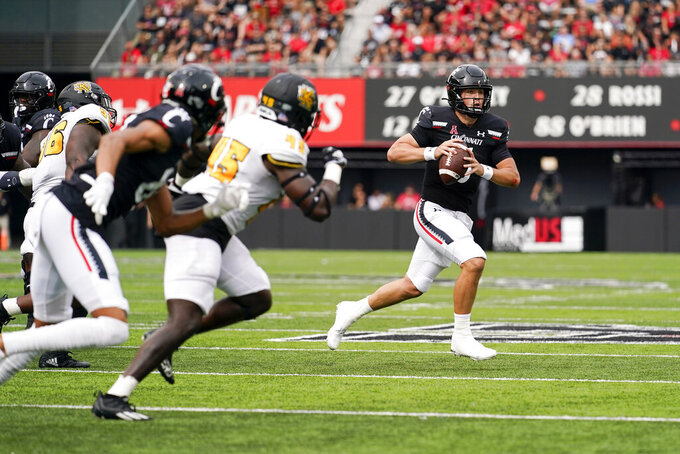 CINCINNATI (AP) — Stopping the run has been an emphasis this season for No. 24 Cincinnati, which allowed only 36 yards on the ground in last week's victory at Tulsa.

The Bearcats (4-1, 1-0 American Athletic Conference) allowed 149 rushing yards per game last season. After giving up 224 in the opener against Arkansas, they have allowed 78 per game in the four games since.

The Bearcats' defense will be put to the test again this week against South Florida, which averages 172 rushing yards led by Brian Battie, who has 397 yards and three TDs while averaging 7.7 yards per carry.

The issue for the Bulls (1-4, 0-1 AAC) is that they've passed for only 174 yards per game, with QB Gerry Bohanon struggling since transferring from Baylor. He has only three TDs and six interceptions.

“He didn’t come until the fall, so I think they probably had a good idea the first four or five games was going to be a bit of development,” Fickell said. “I do believe they have the pieces and the talent.”

Talent isn't an issue for the Bearcats, who have won four straight since losing 31-24 on the road to then-No. 19 Arkansas.

Eastern Michigan transfer Ben Bryant has settled in as Cincinnati's quarterback after a slow start, passing for 1,383 yards and 13 TDs.

Cincinnati leads the nation with 23 sacks and 50 tackles for loss. The Bearcats’ 11 sacks last week at Tulsa were the most against an FBS team this season.

“I think our ability to mix some things up has frustrated opponents," Fickell said. “We are not as static. We are able to create some mismatches, create some confusion, not just for the quarterback, but also for the guys up front.”

Aside from a three-point loss to Florida, USF has lost by an average of 29 points per game, and the pressure is mounting on coach Jeff Scott.

“Nobody likes where we are,” Scott said his week, “but we’re not going to get to where we want to go just by continuing to push reset.”

The Bearcats — who will move to the Big 12 Conference next season — have won 29 straight at home and 17 consecutive games against AAC opponents. They haven't lost at home since Temple beat them 35-24 on Nov. 10, 2017. It is the second-longest home winning streak in the nation behind Clemson (37).

“When we go out there on that field, especially in Nippert (Stadium) it’s just a different feeling," safety Ja'Von Hicks said. “I don’t plan on losing at home anytime soon.”

Ivan Pace Jr. has shined at Cincinnati since transferring from rival Miami (Ohio). Pace leads the nation in tackles for loss while ranking second in sacks and tackles per game. He is a local product from Colerain High School.

“Obviously, you can’t deny the fact that Ivan Pace Jr. is a really good guy inside there that creates some havoc,” Fickell said. “And the more havoc he creates, he also creates a lot more one-on-ones for the guys on edges and even the nose guard.”

His brother, Deshawn, had an 18-yard interception return TD last week for the Bearcats.

A victory over USF would be Fickell’s 53rd at Cincinnati, tying him with Rick Minter for most in program history. Fickell is in his sixth season. It took Minter 10 seasons to reach that total.