No. 25 BYU has experienced crew in final independent year 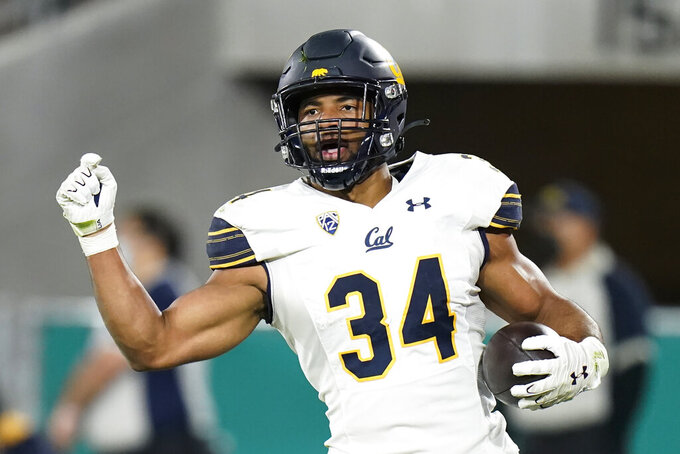 FILE - California running back Christopher Brooks scores a touchdown during the first half of an NCAA college football game against UCLA on Nov. 27, 2021, in Pasadena, Calif. The transfer enters the season as Tyler Allgeier’s successor as BYU's lead back. He made his mark in three seasons with the Bears, leading California in rushing in 2019 and 2021 seasons. (AP Photo/Jae C. Hong, File)

PROVO, Utah (AP) — Experience is No. 25 BYU’s biggest strength entering its final season as an independent before joining the Big 12 in 2023.

The Cougars return 18 starters from a team that posted 10 wins and finished in the AP Top 25 for a second consecutive season. Several key veteran playmakers will lead the offense, including quarterback Jaren Hall, tight end Isaac Rex, and receivers Gunner Romney and Puka Nacua.

“We’re experienced at every position,” Hall said. “Guys know where they’re supposed to be, they know what they’re doing. It’s a good flow right now with the offense.”

Hall, a fifth-year junior, is the lynchpin, giving BYU a dynamic dual-threat presence that gave defenses fits. In 10 starts last season, Hall threw for 2,583 yards and 20 touchdowns while tossing only five interceptions. He completed 64% of his pass attempts.

Hall settled into a comfortable rhythm as a passer as the season progressed and helped BYU average 33.1 points and 451.5 yards per game — ranking in the top 30 nationally in both categories.

The Cougars' success has bred confidence throughout the program and built a winning culture in Provo ahead of BYU’s transition to the Power 5.

“They’re always looking to learn,” BYU coach Kalani Sitake. “That’s what our culture is. We want our guys to keep learning as much as they can.”

BYU used the transfer portal to find a capable successor for Tyler Allgeier in the backfield. Allgeier left for the NFL after racking up 1,606 yards and 23 touchdowns on the ground last season — both BYU single-season records.

California transfer Christopher Brooks enters the season as Allgeier’s successor as the Cougars’ lead back. He made his mark in three seasons with the Bears, leading California in rushing in 2019 and 2021 seasons.

The senior doesn’t feel extra pressure filling Allgeier’s shoes, saying he believes BYU’s offense is tailored to his skills as a running back.

Hall got a little extra coaching from former BYU quarterback John Beck over the summer, and credited Beck with helping him refine his throwing mechanics and improve his arm strength.

Beck played at BYU from 2003 to 2006 and tutored now-New York Jets quarterback Zach Wilson in the offseason during Wilson's stint in Provo.

Hall averaged 8.7 yards per attempt last season and figures to test defenses with long passes more frequently in the season ahead.

“It’s been a big help to learn how to sync everything up,” Hall said. “In return, it’s just allowed the ball to jump out of my hand a little bit better. I think the accuracy has increased.”

The injury bug decimated BYU’s defense as last season progressed, causing problems for the Cougars with stopping the run. BYU should see improvement in that area. Starting linebackers Keenan Pili and Payton Wilgar are fully healthy after last year's season-ending injuries, and the entire two-deep for the Cougars at that position group has starting experience.

Four of the Cougars’ top five tacklers from a season ago are linebackers, led by Ben Bywater, who accumulated 102 assisted and solo tackles.

“Almost all those guys have gotten meaningful reps in games,” Pili said. “You can’t really train that or do that in practice. Being able to have those reps and play puts so much experience on our guys and helps us out in the long run.”

This season is the 100th anniversary of BYU restarting its football program.

BYU briefly played football in the late 1890s when it was known as Brigham Young Academy, but the Cougars do not count any of those games in their official history. The Cougars resumed playing football in 1922, then as a member of the Rocky Mountain Conference.

Two of their opponents this season, Utah State and Wyoming, also appeared on that 1922 schedule.

BYU will open the season at South Florida on Sept. 3. This marks the third meeting between the two schools. The Cougars rode a fast start to a 35-27 victory over the Bulls last season. Hall missed the game after suffering a rib injury in a 27-17 win over Arizona State a week earlier.