No. 25 UCF needs to top USF to have a shot at AAC title game 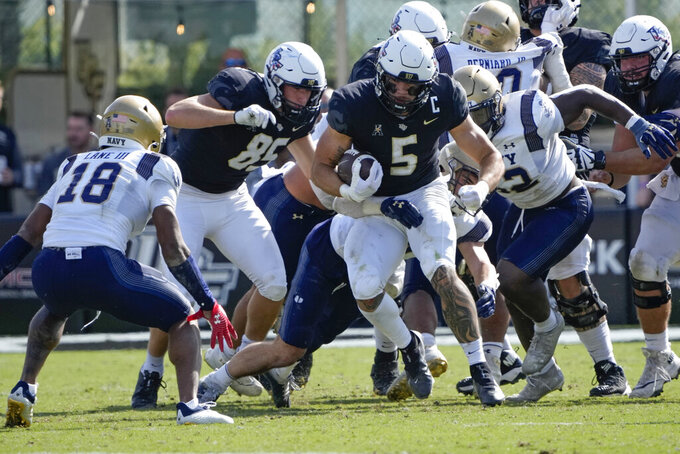 Central Florida running back Isaiah Bowser (5) runs for yardage as Navy safety Rayuan Lane III (18) moves in to stop him during the second half of an NCAA college football game, Saturday, Nov. 19, 2022, in Orlando, Fla. (AP Photo/John Raoux)

The Knights (8-3, 5-2) need to beat struggling intrastate rival USF (1-10, 0-7) on Saturday to remain in contention for a berth in next week’s American Athletic Conference championship game. Coach Gus Malzahn is confident his players understand exactly what’s at stake.

UCF (No. 22 CFP) already cost themselves an opportunity to play in the Dec. 3 title game at home by losing to Navy last Saturday.

Three other teams — No. 19 Tulane, No. 21 Cincinnati and Houston — are still in the running to play for the crown, too. The Green Wave and Bearcats meet Friday with first place and the right to host the championship final on the line.

UCF holds head-to-head tiebreakers in the event of finishing in a two-way tie with the Green Wave or Bearcats. It gets more complicated if there's a three-way tie for second that also involves Houston.

“We win the game, I like our chances,” Malzahn said, shrugging off questions about various scenarios. “They’re thinking about this game, this game only. We’ll worry about that stuff after the game."

USF already fired coach Jeff Scott, and the Bulls have lost five straight times to UCF, including 17-13 in Orlando a year ago.

”It’s a tremendous rivalry because of the geography ... and the kids,” interim USF coach Dan Da Prato said. “The majority of both rosters are comprised of Florida kids. A lot of these kids played with each other, played against each other and have known each other growing up the majority of their life.”

USF’s lone victory this season came against FCS opponent Howard in September. Scott was fired Nov. 6, the day after a lopsided loss to Temple.

Da Prado said the Bulls relish their role as potential spoilers in what the schools commonly refer to as the “War on I-4" — both schools are located off of Interstate 4, less than 100 miles apart.

This will be the 14th and last meeting between UCF and USF, for at least a while. The Knights are making the move to the Big 12 in 2023, which means the schools will no longer meet on a regular basis. The Bulls won six of the first eight matchups between the rivals. The Knights have claimed the last five to take a 7-6 lead in the series.

USF quarterback Byrum Brown made his first career start last week and completed his first 21 passes, with three TDs, during a 48-42 loss to Tulsa. The 21 consecutive completions to start the game were the most by a FBS player since Middle Tennessee State’s Brent Stockstill completed 22 in a row against Alabama A&M in 2016. The freshman finished 21 of 25 for 240 yards.

Malzahn is confident his team will rebound from last week’s 17-14 loss to Navy with a solid performance.

The Knights responded to a six-point, early-season loss to Louisville with a four-game winning streak. They won three in a row to climb into the Top 25 after losing 34-13 on the road at East Carolina in October.

“We bounced back each time earlier in the season,” Malzahn said. “I really expect us to do the same thing.”