No. 8 Baylor eyes landmark Sugar Bowl win vs. No. 5 Georgia 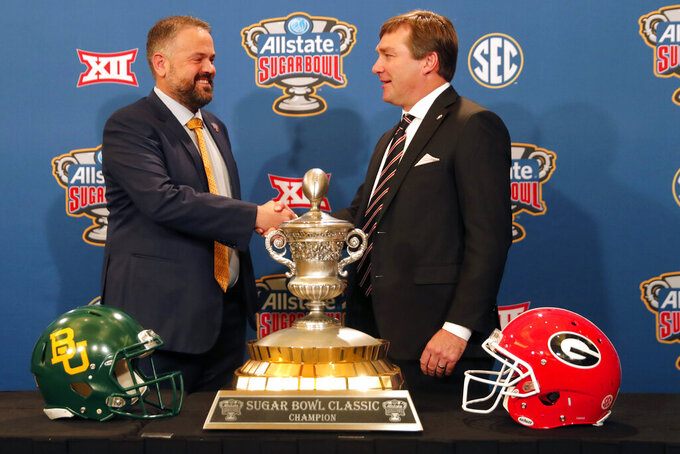 Georgia gives itself a chance to finish in the top five with a win and redeem itself for a 28-21 loss to Texas in the previous Sugar Bowl. Baylor goes for its first victory over Georgia and second Sugar Bowl triumph. The Bears also might need to win to finish with a top-10 ranking.

Georgia's offensive line, which has three starters out, against a Baylor defensive front that had 43 sacks this season. The Bulldogs have given up only 12 sacks this season, but two starters have said they plan to enter the NFL draft and one is academically ineligible.

Georgia: Jake Fromm has had a disappointing season by his standards, passing for 2,610 yards and 22 TDs against five interceptions. Still, he remains among the SEC's most respected quarterbacks.

Georgia's record in the Sugar Bowl is 4-6. ... The Bulldogs have split their past four appearances in the game since 2003 with one Sugar Bowl played in Atlanta — a loss to West Virginia — after Hurricane Katrina in the 2005 season. ... Baylor is 1-0 in the Sugar Bowl, beating Tennessee at the end of the 1956 season. ... Baylor is 4-3 in bowl games against current members of the SEC. ... Georgia is 31-21-3 in bowls, ranking third in victories nationally, behind Alabama (41) Southern California (34). ... Baylor QB Charlie Brewer played at the same Austin, Texas, high school (Lake Travis) as Baker Mayfield, who led Oklahoma to a Sugar Bowl victory over Auburn at the end of the 2016 season. ... Baylor is seeking its first 12-win season in a program dating to 1903. ... Georgia has 11 wins for the 12th time and is eyeing a 12-win season for the fifth time and second time in three seasons.