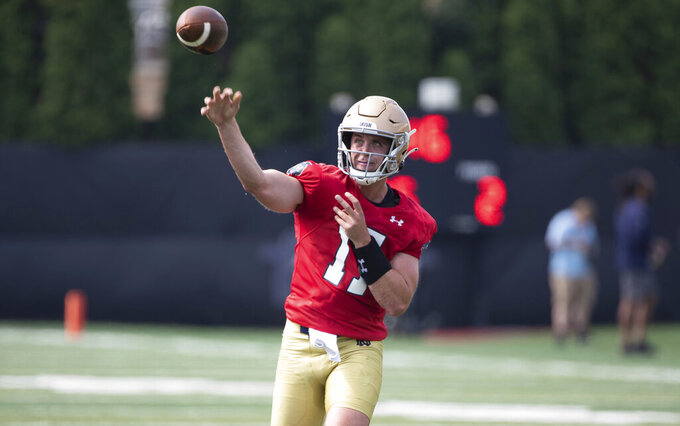 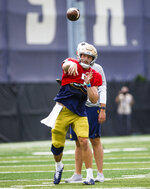 SOUTH BEND, Ind. (AP) — No quarterback since Tony Rice has delivered the goods Notre Dame’s fanatical following has longed for since 1988 – a national championship.

Not Rick Mirer, not Kevin McDougal, not Ron Powlus, not Brady Quinn, not Tommy Rees, not Everett Golson, and not the winningest Irish starting quarterback of them all – Ian Book, who twice led coach Brian Kelly’s team to the College Football Playoff..

When No. 9 Notre Dame opens its season Sept. 5 at Florida State, Book’s successor – Jack Coan, a graduate transfer from Wisconsin – will be asked to end the drought.

“Going into our opener, (Coan) gives us the best chance for success,” said Kelly, who begins his 12th season four victories short of passing Knute Rockne’s 105 wins at the school.

The 22-year-old Coan, who beat out sophomore Drew Pyne and true freshman Tyler Buchner, is eager for his chance at Notre Dame, where he once was offered a lacrosse scholarship.

“Never in a million years did I think I’d end up here after going to Wisconsin,” said the 6-foot-3¼, 223-pound former prep star from Sayville, New York.

In 2019 as a junior, Coan completed nearly 70% of his passes for 2,727 yards and 18 touchdowns against five interceptions during a 10-4 season for Paul Chryst’s Badgers that ended with competitive losses to Ohio State in the Big Ten championship and Oregon in the Rose Bowl.

Coan was expected to be the starting quarterback last season, but suffered a right foot injury in early October that required season-ending surgery. He transferred to Notre Dame in January.

“He came here for a reason,” Rees said. “He’s put in the work; he’s done everything we’ve asked from him and more. But Jack keeps it pretty close to the chest. He’s a guy that’s very poised, very thoughtful in how he reacts. And he’s excited – he’s eager for his opportunity.”

His teammates are eager for Coan to lead them.

“You wouldn’t think Jack coming from Wisconsin would step in and be the leader he is,” said running back Kyren Williams, who rushed for 1,125 yards and 13 touchdowns and had 35 receptions for 313 yards. “I’m excited to go to work with him every day.”

With four-fifths of last year’s starting offensive line now working in NFL camps, senior Jarrett Patterson returns as center after speculation had him possibly moving elsewhere. A preseason All-American, the 6-foot-4½, 307-pound Patterson missed the end of 2020 season and all of spring recovering from foot surgery and is being reacquainted with his teammates who include 6-foot-2½, 310-pound grad transfer guard Cain Madden.

Williams will be spelled in the backfield by sophomore Chris Tyree, senior C’Bo Flemister, and true freshmen Audric Estime and Logan Diggs, who have been impressive. Sophomore Michael Mayer returns after a breakout year to head a deep tight end group.

Despite the loss of several starters including Butkus Award winner and rover Jeremiah Owusu-Koramoah, new defensive coordinator Marcus Freeman has several players with plenty of experience. The best of them is the 6-foot-4, 220-pound junior free safety Kyle Hamilton, who missed the spring after ankle surgery following a 2020 season during which he led the team in tackles.

“I remember last season (cornerback coach Mike) Mickens (who played and coached at Cincinnati) called me and said “We’ve got dude. We’ve got a dude that’s special here,’” Freeman said. “The things (Hamilton) does makes him look effortless. We can use him in so many different ways.”

There are seven team captains, including defensive end Myron Tagovailoa-Amosa. When Kelly made the announcement to his players, they were wearing leis to honor Tagovailoa-Amosa, who was in Hawaii for the funeral of his father and joined his teammates virtually.

“It’s an honor and a privilege to serve my brothers,” tweeted Tagovailoa-Amosa, who wiped away tears.

Notre Dame, which played an Atlantic Coast Conference schedule last season and ended up 10-2, returns to its treasured independent status. This year's schedule features five ACC foes, including No. 10 North Carolina (Oct. 30). There is also a game against Coan’s old team, No. 12 Wisconsin, at Chicago’s Soldier Field (Sept. 25), a home game Oct. 2 against Freeman’s old team, No. 8 Cincinnati, and a visit to Virginia Tech (Oct. 9). Longtime rival No. 15 Southern California visits on Oct. 23.