Offensive line key for No. 14 USC's new additions to succeed 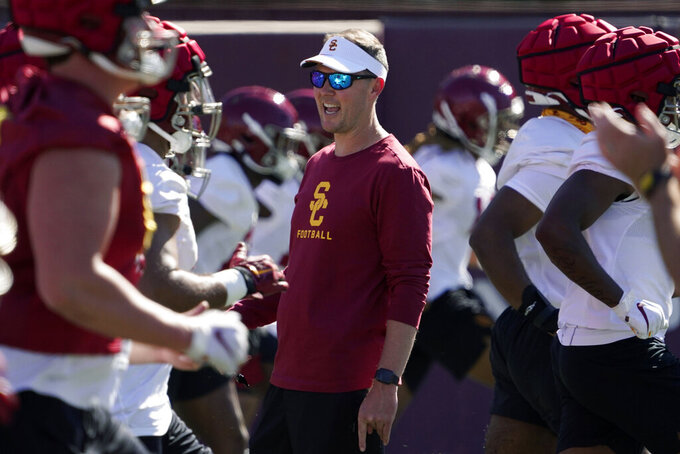 But the impressive collection of talent at the skill positions won’t matter if the 14th-ranked Trojans don't have an offensive line capable of creating running lanes or giving Williams time to throw down the field.

“Day in and day out since spring, that’s been the challenge for us,” right guard Justin Dedich said Tuesday. “We always have skill guys here, and championships are not won just because of them. It’s the dudes up front.”

Although USC made strides last year, allowing the third-fewest sacks in the Pac-12 and improving its rushing offense by 48 yards per game compared to the abbreviated 2020 season, it wasn’t enough to avoid a second losing record in four years, which cost coach Clay Helton his job.

USC's statistical gains were canceled out by its inability to deliver in pressure situations. There were critical breakdowns on third down and in the red zone, where USC scored touchdowns on 28 of 51 possessions (54.9%).

Right tackle Jonah Monheim expects his group to perform better in those scenarios under new coach Lincoln Riley and offensive coordinator Josh Henson, who is also the offensive line coach.

“Regardless of what it is, confidence always comes from preparation,” Monheim said. “So knowing that we’ve prepared, knowing that we’ve been there in practice and we’ve done those short yardage, goal-line situations with the coaches in practice, things like that, and executing there, it’s trusting the training.”

Riley and Henson will mostly have to trust the offensive line they inherited.

Haskins started 20 games in four seasons with the Cavaliers, but he missed all of spring practice because of ankle surgery. The fifth-year senior had to make up for lost time in training camp, where he is competing with redshirt sophomore Courtland Ford to start at left tackle.

“Bob’s been doing a great job since he came in during camp, you know, playing physical and doing good things when he’s playing,” Monheim said. “He’s a great addition to the unit.”

Riley said he would release a formal depth chart following practice on Wednesday, but Ford and Haskins could both be working with the starters in the season opener against Rice on Saturday.

The rest of the line looks set with Andrew Vorhees at left guard, Brett Neilon at center, and Dedich and Monheim on the right side.

There is plenty of experience in that group. Vorhees, Neilon and Dedich are redshirt seniors. Monheim started seven games last season.

Dedich dutifully waited five years to become a full-time starter for the Trojans, and that dedication was recognized as he was named a team captain Wednesday.

“That’s O-line mentality. One-on-one, you got to be gritty,” said Dedich, summing up the attitude USC will need from its linemen so its offensive stars can shine.

NOTES: Williams, Alabama transfer LB Shane Lee and DT Tuli Tuipulotu were also voted captains by their teammates. “The team pretty clearly looks at those four as the guys they want to represent them,” Riley said.