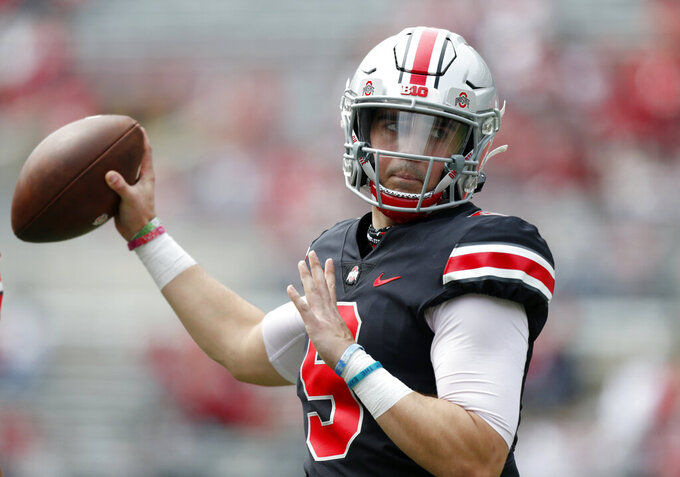 FILE - Ohio State quarterback Jack Miller throws on the sideline during an NCAA college spring football game in Columbus, Ohio, in this Saturday, April 17, 2021, file photo. With two-time Big Ten player of the year Justin Fields departing for the NFL, returning backups C.J. Stroud and Jack Miller III and five-star January enrollee Kyle McCord took the snaps in spring practice. Stroud was believed to be the front-runner entering the spring, but coach Ryan Day said a starter might not be determined until the week of the Sept. 2 opener at Minnesota.(AP Photo/Paul Vernon, File)

Nine of the 14 teams in the Big Ten appear set at quarterback heading into the fall. The five others will continue auditions in August, and no competition will be more closely watched than the one at Ohio State.

Stroud was believed to be the front-runner entering the spring, but coach Ryan Day said a starter might not be determined until shortly before the Sept. 2 opener at Minnesota.

“They've learned a lot, but now the race is on over the next few months to see who can make the next strides so that they’re further along,” Day said. “Spring’s been good. There’s been a lot of progress across the board, but still a long way to to before we play against Minnesota.”

Day is presiding over his first quarterback competition as a head coach. He was offensive coordinator and quarterbacks coach under Urban Meyer when future first-round NFL picks Dwayne Haskins Jr. and Joe Burrow were battling it out in spring 2018.

At Michigan, Cade McNamara would appear to be the favorite following the transfers of Joe Milton and Dylan McCaffrey. McNamara replaced Milton in the first half of the second-to-last game and led the Wolverines to a comeback win over Rutgers, and he got the start the next week against Penn State.

McNamara will be challenged in the preseason by Alan Bowman, who will arrive as a graduate transfer from Texas Tech.

Michigan State’s situation is up in the air after 2020 starter Rocky Lombardi transferred. Payton Thorne started one game as a redshirt freshman, and the Spartans have added transfer Anthony Russo from Temple.

Purdue's competition will begin in earnest in August when Aidan O’Connell returns from a foot injury. He'll go against Jack Plummer and UCLA transfer Austin Burton.

“With this group we have to understand baby steps are important before we can begin to walk or even run," Bielema said. “I took it back to ground zero. No disrespect to where we were, (but) it wasn’t where we needed to be. I wanted to go back and start again and they responded very well.”

Considering there's been a coaching change, a surprisingly high number of players elected to use the extra year of eligibility available from the NCAA because of the pandemic, notably Peters and linebacker Jake Hansen.

Maryland has two new coordinators, Dan Enos on offense and Brian Stewart on defense. Enos was associate head coach and running backs coach at Cincinnati. Stewart was cornerbacks coach at Baylor and will be in his second stint with the Terrapins.

Charlton Warren moved from defensive assistant at Georgia to defensive coordinator and linebackers coach at Indiana.

Mike Yurcich is offensive coordinator at Penn State after spending last season in the same position at Texas.

Bielema's coordinators are Tony Petersen on offense and Ryan Walters on defense. Petersen had the same job at Appalachian State, and Walters moved to Illinois after six years coordinating Missouri's defense.

Rutgers' spring practice was delayed three weeks because of COVID-19 issues. Practice, scheduled to begin March 30, started on April 20 and the spring game was pushed back to May 20.