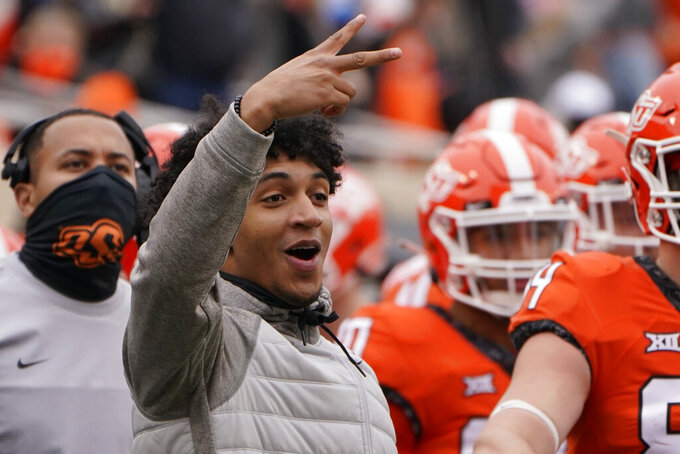 Oklahoma State running back Chuba Hubbard has opted out of the rest of the season and will prepare for the NFL draft.

Coach Mike Gundy made the announcement Saturday on the team's pregame radio show before the Cowboys were scheduled to play Baylor in their regular-season finale.

Hubbard, a redshirt junior, finishes his college career having rushed for 3,459 yards and 33 touchdowns.

Hubbard has missed the past two games with a right ankle injury. He was introduced with the seniors before Oklahoma State's home finale against Texas Tech. He walked onto the field during a pregame ceremony that day wearing his jersey without pads and a medical boot on the injured leg.

Hubbard chose to return to school this season along with star receiver Tylan Wallace in hopes of winning a Big 12 title. But injuries decimated the Cowboys’ offensive line, and the offense struggled. Hubbard ran for 625 yards and five touchdowns this season. He had a three-game stretch with at least 100 yards rushing -- all wins for the Cowboys. He ran for 139 yards and a touchdown against Iowa State in the Cyclones’ only conference loss.

Hubbard's 2019 season was the best by an Oklahoma State back since Barry Sanders' 1988 Heisman-winning season.

Hubbard led the nation in rushing last season with 2,094 yards and finished eighth in the Heisman Trophy balloting. He rushed for 221 yards against Oregon State, 256 against Tulsa, 296 against Kansas State and 223 against TCU. He ran for 158 yards in a loss to Texas A&M in the Texas Bowl.

Hubbard became active on social media this past summer during the fight against racial injustice. He threatened to boycott the program after Gundy was photographed wearing a T-shirt promoting the One America News Network, a cable channel and website that has been critical of the Black Lives Matter movement and praised by President Donald Trump. The two patched up their differences, with Gundy promising to make changes.