Pittsburgh looks to bounce back from loss in visit to Duke 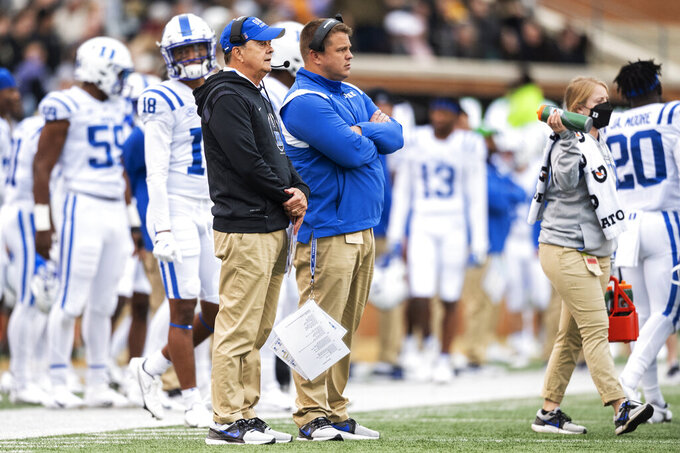 Duke head coach David Cutcliffe looks on during a timeout in the first half of an NCAA college football game against Wake Forest on Saturday, Oct. 30, 2021, in Winston-Salem, N.C. (AP Photo/Matt Kelley)

The Panthers visit Duke on Saturday for a Coastal Division matchup. It comes a week after Pitt (6-2, 3-1 ACC) lost at home against Miami, ending a four-game winning streak that had carried the Panthers into the AP Top 25 while increasing Heisman Trophy buzz for quarterback Kenny Pickett.

Pitt still leads the division race, though Virginia (4-2 ACC) sits a game back in the loss column and still has a matchup with the Panthers ahead that could determine the division winner.

“There’s no room for error,” Pickett said. “The sense of urgency is up. ... We’re going after it. There’s not a lot of missed assignments and you can tell guys are in the playbook.”

The challenge is different for the Blue Devils (3-5, 0-4), who are trying to turn around a season that is getting away from them fast.

Duke followed a 48-0 loss at Virginia by barely avoiding another shutout in a 45-7 loss at No. 10 Wake Forest last weekend. The top unit hasn’t scored a touchdown since early in the fourth quarter of a 31-27 home loss to Georgia Tech on Oct. 9.

“Whatever it is each week, we just need to keep working,” running back Mataeo Durant said. “We don’t need to give up in the middle of a season when we have a few more games left. We still have a lot to play for."

Some other things to know about Saturday’s Pittsburgh-Duke game:

Pittsburgh coach Pat Narduzzi insists he’s still got confidence in his defense even after it gave up 492 yards against the Hurricanes, the second time the unit has been lit up in a home loss. Western Michigan racked up 517 yards in a stunning September upset.

Narduzzi noted Pitt’s mistakes against Miami were mostly in the first quarter as the Hurricanes raced to a 21-7 lead. The Panthers gave up just a single touchdown after the break, though it came immediately after Pitt tied the game at 31.

“If it would have been a first half and the second half the same, maybe we’re back to square one,” he said. “But we’ve got a good football team and I’ve got a lot of trust and faith in our guys.”

Duke gave up 100 unanswered points from late in the Georgia Tech loss until reserve quarterback Riley Leonard scored on a 2-yard keeper with 7:17 left against Wake Forest, a run of 25 straight completed drives (uninterrupted by halftime or the game’s end) without scoring.

“When you get in the red zone, my line of thinking has always been you’re getting more and more like a backyard,” Duke coach David Cutcliffe said. “You think people at that point, you’ve got to have the right go-to people. … And you’ve got to design better around that. That’s, again, my job.”

Pittsburgh is 3-0 on the road against power-conference opponents, starting with a win at Tennessee on Sept. 11. The Panthers won at Georgia Tech by 31 and at Virginia Tech by 21 in league games last month.

Pittsburgh has won six of seven with Duke since joining the ACC for the 2013 season, including the last five. Duke’s lone win came in a 51-48 shootout in 2014 on the road.

The division opponents didn’t play last year for the first time since Pitt’s arrival after the league shuffled its scheduling model due to the COVID-19 pandemic.

Pitt could be without senior receiver Taysir Mack, who exited last week’s game and had his left arm in a sling in the second half. Mack is third on the team with 27 receptions for 461 yards and three touchdowns.

A season ago, Mack’s absence might have been a problem. Pickett, however, has had little trouble spreading it around with 16 different Panthers catching at least one pass.

Freshman tight end Gavin Bartholomew has joined graduate transfer Lucas Krull to give Pitt depth at a position where production has lagged for years. They have combined for 38 catches for 464 yards and six scores.