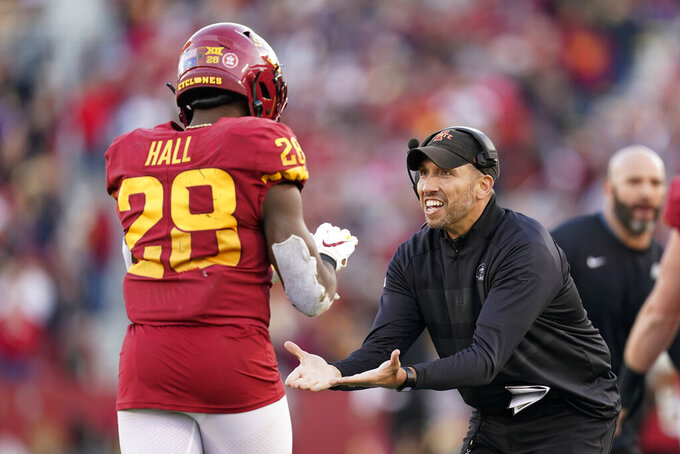 The Cyclones are going after their fourth straight win and hope to stay firmly in contention for a spot in the Big 12 championship game. Iowa State is tied for second with No. 15 Oklahoma State and No. 16 Baylor, behind No. 4 Oklahoma. The Cyclones have beaten Oklahoma State, lost to Baylor and still must play the Sooners. West Virginia has to win three of its five remaining games to become bowl eligible.

Iowa State's defense against West Virginia RB Leddie Brown. West Virginia is 8-1 when Brown surpasses 100 yards rushing over his career. He was held under 50 yards in two previous meetings against the Cyclones. Iowa State has not allowed a 100-yard rusher and has given up a league-low four rushing touchdowns this season.

Iowa State: WR Xavier Hutchinson. The 6-foot-3 senior will have a distinct height advantage against the smaller West Virginia secondary. He had a career-high 12 catches for 125 yards and two TDs in a 24-21 win over Oklahoma State last week. Hutchinson's 46 receptions lead the Big 12 and he's third in receiving yards with 539.

West Virginia: LB Josh Chandler-Semedo. The senior has had double-digit tackles three times this season, including an 11-tackle effort last week in a 29-17 win at TCU that broke the Mountaineers' three-game losing streak. Chandler-Semedo is second in the Big 12 in tackles at nearly nine per game.

Iowa State is 16-2 in October games since 2017. ... The Cyclones' Brock Purdy is completing 75% of his passes this season and is looking to go 4-0 against the Mountaineers. ... Iowa State's Will McDonald and West Virginia's Dante Stills are tied for the league lead with nine tackles for loss. ... Iowa State won the last three meetings by a combined score of 110-34. West Virginia averaged 175 total yards in those games. ... Iowa State coach Matt Campbell said he is confident that linebacker Mike Rose, who has started 45 straight games, will play after getting banged up last week.